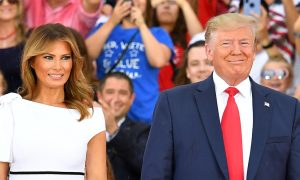 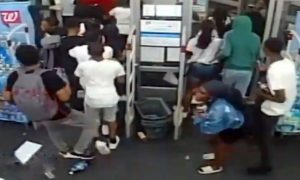 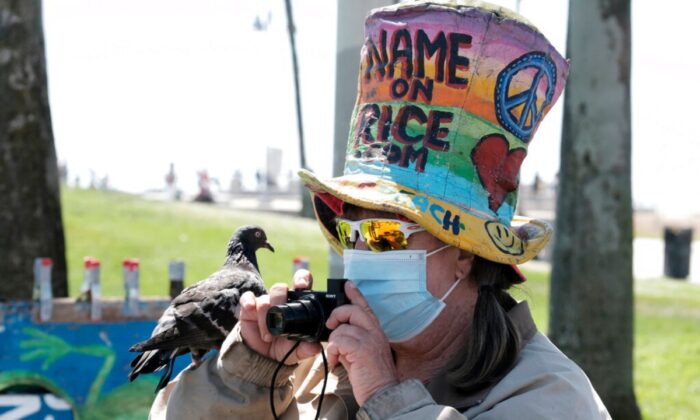 Vendor Vivianne Robinson, wearing a mask to protect from the coronavirus, takes a photo with a pigeon perched on her hand along the Venice Beach strand, on July 3, 2020, in Los Angeles. (Richard Vogel/AP Photo)
US News

Meanwhile, law enforcement officers were out and about, reminding people to wear masks in public and turning away disappointed sun-seekers from beaches that were closed to discourage crowds for the holiday weekend.

California is in a make-or-break moment with infection rates and hospitalizations rising sharply. Gov. Gavin Newsom this week ordered the three-week closures of bars, indoor restaurant dining areas, and other indoor venues for 21 of 58 counties, including the two most populous, Los Angeles and San Diego.

The rollbacks have been frustrating for businesses just emerging from months without customers after Newsom ordered people to stay home in mid-March. Public health officials pleaded with people to obey social distancing and mask-wearing requirements and to stay home this holiday because big crowds could further fuel the outbreak.

Half Moon Bay on the Pacific Coast south of San Francisco set up barricades to prevent access to its beaches, but determined beachgoers on Friday simply carried small children and gear over the blockades.

“So our sheriffs patrols were just driving up and down the coast,” said Jessica Blair, communications director for the city. “It was just a revolving door of people climbing over the barricades, getting set up and getting kicked out.” She expected the problems to continue Saturday.

The Southern California cities of West Hollywood and Santa Monica as well as the central coast city of Monterey are enforcing mask mandates with tickets ranging from $100 to $300 for a first offense. About 200 state inspectors that are part of new “strike teams” set up by Newsom are fanning out over the weekend to enforce rules.

Seal Beach police Sgt. Nick Nicholas said Saturday extra officers are out in the Orange County city to make sure people stay off the beaches. He said the department’s goal is to educate people on wearing masks, but they won’t be so forgiving when it comes fireworks, which are not allowed anywhere in the city.

“We are taking a zero tolerance approach to fireworks,” he said.

On Saturday, California reported another 6,500 newly confirmed cases of coronavirus, bringing the state’s total to more than a quarter million cases. The actual number of infections is thought to be far higher because many people have not been tested, and studies suggest people can be infected with the virus without feeling sick.

The country’s recent reckoning with racial injustice also marked the day. Demonstrators in San Jose created a Black Lives Matter mural while former Gov. Arnold Schwarzenegger said on Twitter: “Happy birthday, America. Thank you for letting me live the American Dream. We must fight every day to make sure that dream is as true for a black child born in Minneapolis as it was for a white bodybuilder born in Austria.”

Many communities canceled annual fireworks shows and limited or closed beaches. The beach closures began Friday from Los Angeles County northward through Ventura and Santa Barbara counties. To the south in Orange County, hugely popular beaches such as Huntington and Newport were to close Saturday and Sunday.

San Diego County beaches remained open and saw tens of thousands of visitors on Friday. Many clustered in socially distanced groups when they weren’t splashing in the shallows. But lifeguards said not everyone was obeying public safety rules despite public address system reminders. In Encinitas, lifeguards provided free masks.

Authorities have warned even ordinary gatherings of families and friends have been identified as sources of COVID-19 infections.

In remote Northern California, Lake County reported its first COVID-19 related death Friday and Humboldt County said Friday that about a quarter of its 144 cases were reported in the past two weeks.

“This has been driven largely by residents gathering and visiting between households both locally and while traveling, as well as by illness occurring in the cannabis industry workforce,” said Dr. Teresa Frankovich, the county health officer.

The state also is fighting an outbreak in its prisons. The virus is suspected of killing two more death row inmates Friday at San Quentin State Prison, where about 40 percent of inmates are now infected, corrections officials said. Two other condemned inmates previously died at the prison near San Francisco.

For most people, the new coronavirus causes mild or moderate symptoms, such as fever and cough that clear up in two to three weeks. For some—especially older adults and people with existing health problems—it can cause more severe illness, including pneumonia, and death.