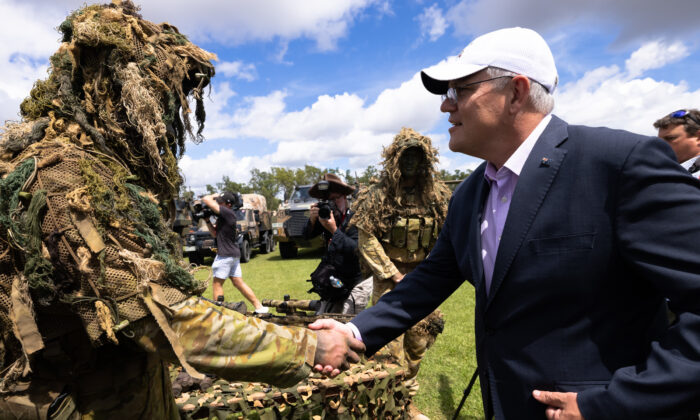 The Australian federal government has pledged $747 million (US $578 million) to upgrade four military training facilities in the Northern Territory, in time for war gaming exercises with the United States and allies.

Prime Minister Scott Morrison flew to Darwin for the announcement saying the spend was critical to provide Australian soldiers with the best technology and training, and to also confront a “challenging global environment.”

“Working with the United States, our allies, and Indo-Pacific neighbours, we will continue to advance Australia’s interests by investing in the Australian Defence Force, particularly across northern Australia,” Morrison told reporters.

“Our focus is on pursuing peace, stability and a free and open Indo-Pacific, with a world order that favours freedom,” he added.

The prime minister said the announcement was unrelated to China.

“All of our objectives through the activities of our defence forces is designed to pursue peace. That is the objective of our government. That is the path that we are pursuing,” he said.

The airstrip at Bradshaw Field will be lengthened and reinforced to support heavier aircraft.

Federal Opposition Leader Anthony Albanese said, “The government needs to just stop re-announcing the same things over and over again.”

“Once again, we see a re-announcement, but with an inflated price, to hide the fact this government doesn’t deliver,” he told reporters in Darwin.

The upgrades will cost up to $447 million more than initial estimates in 2019, but the prime minister said there were significant upgrades, particularly in light of the changing strategic environment.

The Darwin visit comes soon after Home Affairs Secretary Mike Pezzullo called for Australia to be more prepared, saying the “drums of war” were beating in the region.

“Today, free nations continue to face this sorrowful challenge,” he wrote in a message to his department. “In a world of perpetual tension and dread, the drums of war beat—sometimes faintly and distantly, and at other times more loudly and ever closer.”

Warnings of potential conflict have increased in recent months, particularly as the Chinese Communist Party (CCP) continues its posturing towards Taiwan.

Chinese military jets have also made near-daily incursions into Taiwanese airspace, while the People’s Liberation Army has continued its build-up across the strait.

Defence Minister Peter Dutton said on Sunday that conflict around Taiwan could not be ruled out.

“People need to be realistic about the activity,” Dutton told the ABC.

“There is militarisation of bases across the region. Obviously, there is a significant amount of activity, and there is an animosity between Taiwan and China.”