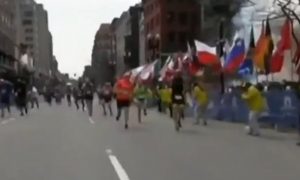 MIT officer killed: Sean Collier, a Massachusetts Institute of Technology (MIT) police officer who was killed in the line of duty by the two Boston Marathon bombing suspects, was described as an exemplary officer.

Collier, 26, was “a dedicated officer who was extremely well liked by his colleagues and the MIT community,” according to MIT Police Chief John DiFava in a press release issued by the Middlesex District Attorney’s office on Friday.

On Thursday night, Collier was found shot in his vehicle. When he was transported to a nearby hospital, he was pronounced dead on the scene.

“We are heartbroken by the loss of our wonderful and caring son and brother, Sean Collier,” his family wrote in a statement obtained by the Boston Globe. “Our only solace is that Sean died bravely doing what he committed his life to — serving and protecting others. We are thankful for the outpouring of support and condolences offered by so many people.”

Collier had involved himself in the MIT Outing Club, where he hiked and skied with students.

“We recall him bringing earplugs for an entire cabinful of people, going out of his way to give people rides, offering help for bike or any other problems. He made a point of getting to know students, asking them about details of their lives, enthusiastically sharing his own experiences,” the club said on its website.

He graduated from Salem State University in 2009 and majored in criminal justice.

After Collier was shot, the two suspects carjacked a victim and kept the vehicle for around a half an hour. The victim was released unharmed at a gas station in Cambridge, according to the District Attorney’s office.

Explosive devices were also reportedly thrown from the stolen vehicle during the police chase. Suspects also exchanged gunfire with police at Dexter and Laurel streets, injuring a police officer.

One of the suspects, identified as 26-year-old Tamerlan Tsarnaev, was critically wounded and died a short while later at a hospital. The other suspect, 19-year-old Dzhokhar Tsarnaev, is still at large.