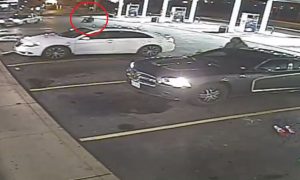 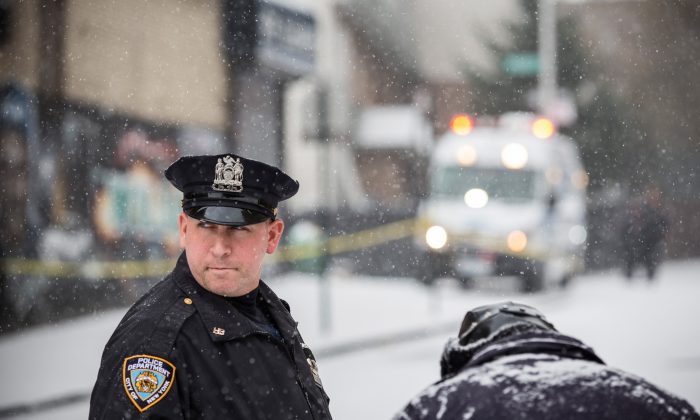 Police officers guard the perimeter of a crime scene where two police officers were shot and wounded while responding to a robbery on January 6, 2015 in the Fordham Heights neighborhood of the Bronx borough of New York City. ( Andrew Burton/Getty Images)
Crime and Incidents

A small Missouri town 15 minutes outside of downtown St. Louis is being sued by the American Civil Liberties Union for not handing over information that would address allegations that at least one city official is interfering with the work of local police.

In a lawsuit filed against the city of Wellston, Missouri on Feb. 12, the ACLU charges that a variety of records about the local police department were requested multiple times in January under the state’s Sunshine Law. According to the lawsuit, no response was received. It is illegal to fail to respond to a public records request, particularly for a public body like a city council.

Some of the records the ACLU wants to see include police reports, city council minutes, and audio recordings from closed sessions of the city council.

They are also seeking records related to Terrance Dixon, a local man who has been investigated for domestic violence and abuse and is the son of city council member Janet Dixon.

Three officers involved in Dixon’s case were fired, then reinstated by a local judge, and one officer was later fired a second time. The Wellston police chief has said in interviews with local media that the firings have created an environment of intimidation and harassment among local police.

The ACLU says in their lawsuit  that it is has been claimed that city officials are retaliating against police officers for investigating a city council member’s family member.

According to information obtained exclusively by the local FOX affiliate KTVI, in police documents, a woman accusing Terrance Dixon of domestic violence told police: “I’m tired of getting beat. Every time this happens, his mother Janet Dixon gets him out of trouble.”

The ACLU says that the public records they’ve asked for will “shine light on claims that city officials are retaliating against police officers” for doing their jobs. The say that their “requests for records have been ignored.”

It’s not the first time that the city of Wellston has had trouble with the law. In April 2014, the FBI raided Wellston City Hall in search of financial documents related to a case they were pursuing. Just one month later, the mayor was impeached. She ran in the elections about two weeks later, won her seat as mayor back, and then landed in court. A city ordinance states that an impeached official may not run for office again.