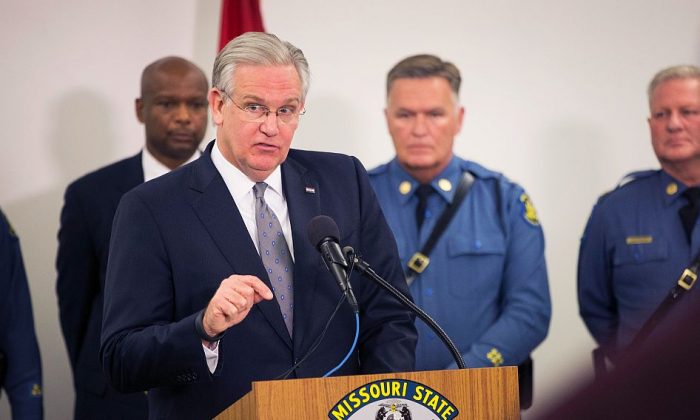 In anticipation of a grand jury verdict on the shooting death of Ferguson’s Michael Brown, Missouri Gov. Jay Nixon said Tuesday that violence will not be tolerated.

“As governor, the most important part of my job is keeping people safe,” said Nixon during a press conference at St. Louis Community College.

After noting that numerous incidents of violence and public disorder took place during the summer after Brown was shot to death Aug. 9 by Police Officer Darren Wilson, the governor issued a stern warning.

“That ugliness is not representative of Missouri and cannot be repeated.”

The protests, which went on for weeks, were largely peaceful. There were some incidents of looting and violence. But police were also widely criticized for a response that was seen as heavy-handed and often in conflict with the basic civil rights of citizens and journalists.

As of Oct. 13, the tally of journalists arrested while covering the story was at 21, according to an independent review by PEN America.

In light of public fallout over transgressions by police, Nixon said that in the past months, over 1,000 law enforcement officials have undergone more than 5,000 hours of additional training. Part of that training has been on constitutional rights, including the right to peacefully assemble and gather news unimpeded. The governor also said that an independent commission will be created to study issues that have surfaced since the fatal police shooting of Brown.

Although he said civil rights will be respected following the grand jury decision is announced, the governor also warned repeatedly that violence and lawlessness—regardless of the outcome of the decision—will be dealt with swiftly. In addition to local and state law enforcement officials, Nixon said the National Guard will be on standby to assist if needed.

The press conference came on the same day that Brown’s parents were in Geneva to address the U.N. about the fate of their son. The 18-year-old was unarmed when he was shot multiple times by Wilson.

There has been little word on when the grand jury will make its highly anticipated announcement as to whether or not Darren Wilson will be indicted. The 12-person group, drawn from the general population, has been deliberating for weeks. The St. Louis County prosecutor’s office has made pointed public statements to the effect that speculation over when the decision will come out is nothing but pure rumor. The office has said that it expects a decision to be announced in mid- to late November.

When the decision is finally made public, Nixon said the state highway patrol, city police, and St. Louis County police will work together as one unified force to keep order and protect the public. They will also work together to identify members of the public “intent on violence,” according to Nixon.

Some protest organizers fear the police response to any protests or public gatherings will be extreme.

Ashley Yates of St. Louis, co-creator of the group Millennial Activists United noted that the vast majority of protests have been peaceful and said Nixon should focus on addressing the systemic problems faced by minority communities, “not reactionary policing techniques.”

It isn’t just law enforcement getting ready for the announcement. Organizers of Yates’s group and other protesters gathered Tuesday for training that includes how to take notes and shoot video of police actions on the streets.

“There is a significant effort to make sure that people’s rights are protected and that there’s no violence on either side,” said Andy Stepanian, a spokesman for several protest groups.