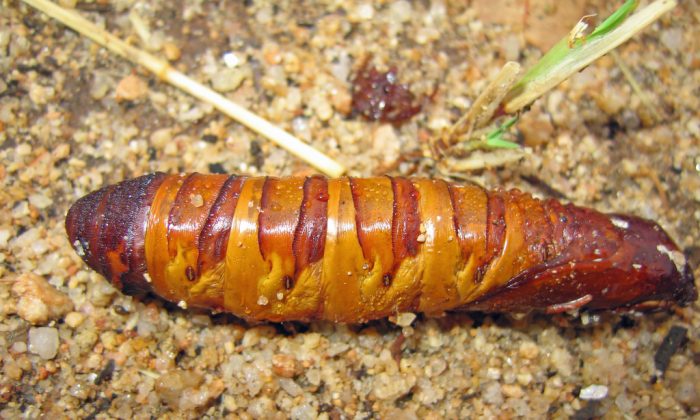 A witchetty grub is pictured in this file photo. (Greg Schechter/Flckr)
International

Cut off by floodwaters in a remote corner of Australia’s notoriously dangerous Outback, a group of five survived thanks to their bush skills.

The group, which included an 8-year-old child, had to abandon their vehicle, eating witchetty grubs and drinking from rock pools to stay alive, according to local media reports.

Setting out on a 660-kilometer (410 miles) journey across the remote Outback in Australia’s vast and sparsely populated Western region, they were caught in floodwaters on Jan. 3o.

When they failed to arrive at their destination village of Tjuntjuntjara, police were alerted, and with the area still inaccessible by road, an air search of the vast territory was eventually launched.

An airplane eventually found the group, 10 km from their Hyundai Excel., on Feb 3.

They were then picked up and taken home by helicopter.

Police described the group as being in “relatively” good health, saying they had found and eaten witchetty grubs for survival, according to ABC.

They might not have survived if they had not been skilled bushmen, according to local community leader, Moray Ralph.

“We can just imagine where the car would have been stranded and that would have turned into a lake by now,” Ralph, who is Paupiyala Tjarutja Aboriginal Corporation chief executive, told ABC.

The entire Paupiyala Tjarutja community gathered at the airport to welcome them home, he said.

“There is a great deal of relief throughout the community, lots of people were clearly happy that they have come back,” he said.

The group appears to have been caught out by a change in the weather.

“The sun was shining when these people left, the road was dry for about 260 kilometres,” said Ralph.

It may take another week for floodwaters to subside. In the meantime, supplies are being airlifted in.

About 3.5 tonnes of supplies are being airlifted to the remote Aboriginal community of Tjunjuntjarra, about 550km east of Kalgoorlie-Boulder. About 200 residents have been cut off by floodwaters for the past two weeks. @ABCGoldfieldsWA @abcperth @abcdrivewa @ABCemergency pic.twitter.com/v5p58MWILX

The adults in the group were named by police as Rex Mitchell, Janice Stevens, Shonna Jamieson, and Bruce Stevens.

The group had been traveling from Kalgoorlie in the south of Western Australia, a region with a population of 2.5 million spread across 1.6 million square miles—nearly four times the size of Texas.