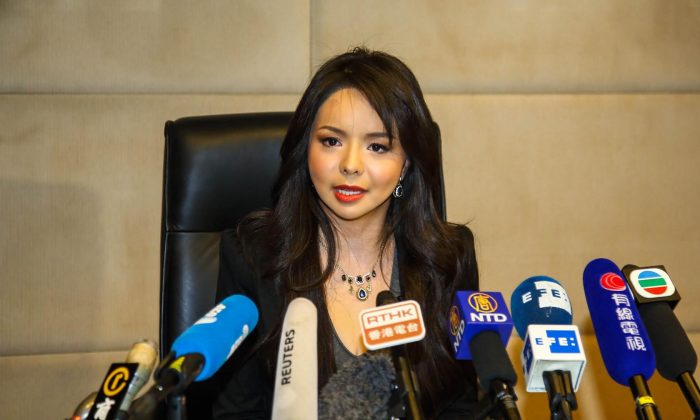 HONG KONG—Anastasia Lin‘s plan in passing through Hong Kong last night was not to create another media storm; but that’s just what happened after authorities in the Chinese province of Hainan denied her entry, once and for all, to the city of Sanya where the Miss World pageant is currently being held.

Lin is an outspoken supporter of human rights in China and a practitioner of Falun Gong, a spiritual practice that has been persecuted in its homeland for the last 16 years.

She was crowned Miss World Canada in May this year, meaning that she would represent the country at the international pageant. But once it became clear that the final would be held in China, controversy swirled about just how the Chinese Communist Party—desirous of international prestige, but committed to a brutal persecution of Falun Gong and other groups Lin has spoken out for—would react.

For weeks the Chinese authorities remained silent, but Lin found out that her official status was “persona non grata,” or unwelcome, through a statement made by the Chinese Embassy in Ottawa. That was while she was flying to Hong Kong, to transfer to the resort city of Sanya, on Nov. 25.

She was unable to make the connecting flight after a Chinese immigration officer informed her, through a telephone call arranged by Dragon Air, her airline, that she would not be permitted in the country.

And so the following morning, she held a press conference in the Hong Kong Regal Airport Hotel to tell a few dozen journalists what had happened. They trailed along the walls and out the door of the board room, a combination of local and international media, as Lin encouraged them to keep putting pressure on the Chinese authorities, about the treatment dealt her and others.

“Ask the Chinese government why it is afraid of a beauty queen,” she said. “Ask them what kind of precedent this sets for future international events.

“But don’t stop with asking them questions about my case alone,” she said.

“Ask them why they won’t let human rights lawyer Gao Zhisheng visit a dentist after he lost most of his teeth due to torture.

“Ask them how it is that Chinese hospitals perform tens of thousands of organ transplants, even though voluntary organ donation is virtually non-existent, and the numbers of official executions in China is far from sufficient to supply this quantity.

“Ask them why they don’t trust their own people to be able to read uncensored information.”

Reporters asked her about the technicalities of her attempt to get into China (she tried to take advantage of a loophole which grants “landing visas” to individuals from certain countries, including Canada, upon arrival to Sanya); whether the Miss World Organisation had been supportive (they’ve been mostly reticent, but hinted to Reuters that she may be able to compete next year); and what her connection is to Falun Gong (she is a practitioner of the traditional Chinese discipline, which includes meditation and moral teachings. It has been persecuted in China for 16 years.)

In an interview with CTV, the Canadian broadcaster, the night before the press scrum, Lin was asked whether it was China or Anastasia Lin that had changed the most since she left the country at 13 years of age. “I have definitely changed a lot,” she said. “In China, we were educated in a way that the Communist Party was the closest member of your family. I even helped spread propaganda against Falun Gong and Tibetans.”

“After I came here, my mum started to introduce me to the ways that the Western world thinks. That’s when I started to open my eyes to all these different stories,” she said, having now become a story herself.