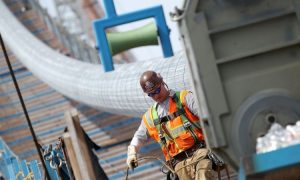 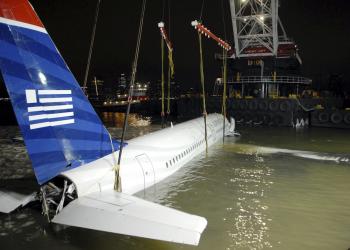 US Airways flight 1549 known as the 'the Miracle on the Hudson,' being removed from its makeshift mooring along a seawall in lower Manhattan January 17, 2009. The plane will now find a home as a tourist attraction at the Carolinas Aviation Museum. (Edouard H.R. Gluck-Pool)
US

‘Miracle on the Hudson’ Plane to be Displayed in Charlotte Museum

By Diana Hubert
Print
NEW YORK—US Airways Flight 1549-the plane that became "the Miracle on the Hudson" in January of 2009 when pilot Chesley "Sully" Sullenberger safely landed the Airbus A320 in an emergency landing on the Hudson river, will now find a home as a tourist attraction at the Carolinas Aviation Museum.

In hopes of attracting more visitors to the museum, Shawn Dorsch, president of the museum, is in the process of purchasing the plane from the insurance company that owns it.

The crash took place shortly after flight 1549 took off from La Guardia Airport heading towards Charlotte, NC, the location of the museum.

For the past two years, the plane has been sitting in a warehouse in Kearny, N.J.

"It's a fantastic piece of history,' Dorsch told the Associated Press, noting that he hopes the plane will be exhibited by May. "It has everything from the dents from the birds to the Coke cans and the food carts to the markings from the NTSB investigation on the aircraft. It's just fascinating to walk around the aircraft. Except for the passengers' belongings, it's like a time capsule."

Captain Sullenberger, widely hailed as a hero for his smooth water landing, landed the plane on the river to safety after both engines were disabled by a flock of geese on its departure climb, according to the National Transportation Safety Board (NTSB). All 155 passengers on board, five crew members and 150 passengers,were taken to safety by emergency crews. NTSP reported only five serious injuries.

In a statement NTSB reported that the plane went down three and a half minutes after striking the birds and five minutes after leaving the airport.

The museum was opened in 1992 by Floyd and Lois Wilson, founders of the Carolinas Historic Aviation Commission in hopes of preserving aviation history.

Dorsch told the AP that the museum is visited by over 30,000 people each year, which he hopes will increase to over 100,000 once the acquisition of the Hudson plane is complete.