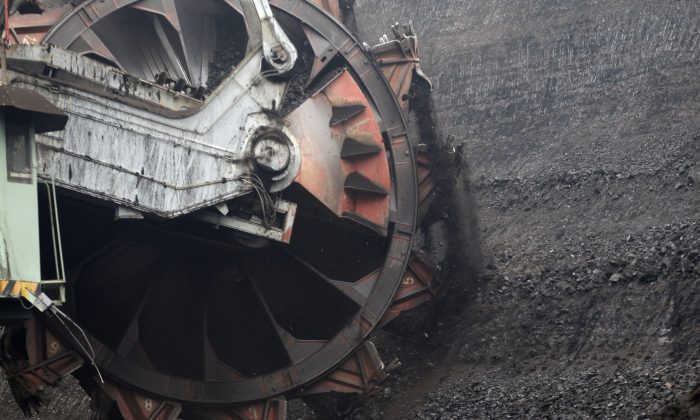 A huge excavator digs inside a giant open pit lignite mine in Most Town, Czech Republic, on Nov. 6, 2015. Ahead of the U.N. climate conference in Paris, the Czech government approved a plan to expand the mining of lignite, a fossil fuel known as brown coal, a major source of greenhouse gases. (AP Photo/Petr David Josek)
Business & Economy

LONDON—The decision by a London-based mining company to shed 85,000 jobs is the sign of a global industry in crisis, with conglomerates reassessing their huge operations to cope with a drop in demand from Chinese factories for metals and other raw materials.

Anglo American said Tuesday it will shed some 63 percent of its workforce in a radical restructuring meant to cope with tumbling commodity prices. It will streamline its global business from some 55 mines to around 20.

CEO Mark Cutifani said the drop in commodity prices requires “bolder action,” even though the company has delivered on performance and previous business restructuring objectives. He pledged to provide more details later.

The dividend was suspended for the second half of 2015 and 2016. Investors reacted with dismay. The company’s share price fell 11 percent to 327.30 pence.

Mining companies around the world are facing tough times as economic growth slows in China, whose manufacturers’ need for raw materials has driven a years-long boom in mining in countries like Australia and Brazil.

China accounts for as much as 40 percent to 50 percent of global commodity demand, according to consultants PwC. Its economic growth is forecast to drop below 7 percent a year from double digits in recent years—and commodity prices are tracking it lower.

“Mining companies are feeling the wrath of the collapse in commodity prices,” said Gianna Bern, who teaches finance at the University of Notre Dame in Indiana and expects others across the industry to also either cut or suspend their dividends to cope. “Companies are weathering some very tough economic times.”

The price of copper has dropped about 30 percent in the past year; gold 11 percent; iron ore has about halved. Companies have focused on cutting costs and reducing capital spending, but market values have continued to decline among the top 40 companies—losing some $156 billion or 16 percent of their combined market value in 2014, PwC said.

“With few exceptions, the commodity price outlook remains dim, forcing miners to keep up their guard,” PwC said in its report. “As the old saying goes, survival will be of the fittest, and for miners also the leanest.”

Just as first there was a big boom in commodities, now there’s an equally big bust, said Julian Jessop, the chief global economist at Capital Economics.

“I think the pendulum has swung too far to pessimism but as long as you have pessimism, you’re going to get these big cuts.”

Anglo American is not alone. Shares in Glencore slid about 30 percent in one day in September amid concerns over its ability to service sky-high debts at a time of low market prices. Glencore shares have since stabilized as the company announced the sale of several mines, but they were down another 9 percent on Tuesday. Rival BHP Billiton fell 6 percent and Antofagasta 5 percent.

But Anglo American is different from others in that two commodities in its portfolio—diamonds and platinum—are labor intensive to extract, said Kieron Hodgson, a mining analyst at Panmure Gordon & Co. The company said it provides some 40 percent of the world’s newly mined platinum from South Africa and Zimbabwe. De Beers and its partners produce a third of the world’s diamonds by value, employing more than 20,000 people around the world.

As Anglo American moves to rationalize its business, it will reduce its assets by 60 percent. It will consolidate from six to three businesses. The company will also move its London office to “co-locate” with DeBeers, its majority-owned diamonds business by 2017.

Some $3.7 billion of cost and productivity improvements are underway and set to be completed by 2017.

Cutifani also confirmed Anglo will sell the phosphates and niobium businesses during 2016.

“We will set out the detail of the future portfolio in February, with the aim of delivering a resilient Anglo American and a step change in the transformation of the company,” he said.

Some analysts wonder if it will be enough.

“It’s underwhelming as a package,” Hodgson said. “The business needs to reappraise itself in a manner that gives it a future.”