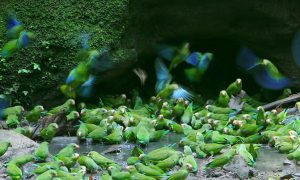 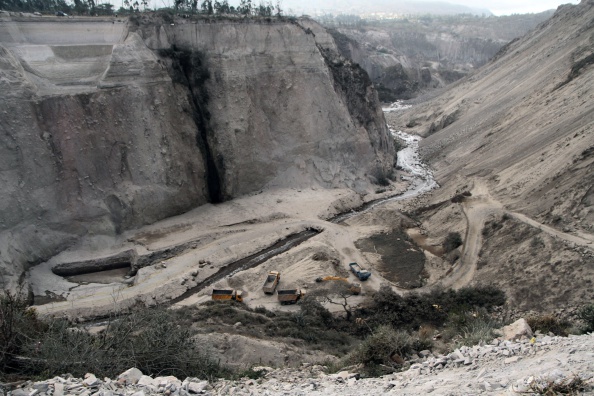 View at the quarry in Catequilla, near Quito, following a landslide after a 5.1-magnitude earthquake rattled the Ecuadoran capital and the surrounding area causing buildings and homes to shake violently, on August 12, 2014. (Juan Cevallos/AFP/Getty Images)
Environment

Yesterday, mining and environmental activist, Javier Ramírez, walked out of an Ecuadorian courtroom with his freedom. Ramírez, who has long fought against a massive state-owned massive copper mine in the cloud forest village of Junin, was arrested in April last year and subsequently charged with rebellion, sabotage, and terrorism among other thing. The judge sentenced Ramírez to ten months in prison for rebellion, but he was set free since he had already been in a prison a total of ten months.

Last April, Ecuador’s National Mining Agency (Empresa Nacional Minera del Ecuador or ENAMI) accused Ramírez of allegedly assaulting its staff as it visited the area to promote the hugely-controversial Llurimagua mining project covering 4,839 hectares, which is currently carrying out exploratory work. But numerous witnesses, including Ramírez’s own doctor, stated that Ramírez was no-where near the incident, but instead at home nursing an injured knee.

Amnesty International called for the charges to be dropped due to a “lack of evidence.” Javier Ramírez’s brother, Víctor Hugo, was also charged, but remains at large.

“The criminal proceedings against them appear to be an attempt to silence their campaigning against the impact of mining activities on their community’s right to water,” wrote Amnesty International.

Some three hundred supporters were there when the sentence was read out and Ramírez freed, including Ramírez’s wife and four children. On being released Ramírez said, “We will continue the fight and impugn the sentence, because I am innocent.”

Ecuador’s government has been accused of becoming increasingly aggressive towards environmental activists. In 2013, the government shutdown one of the country’s biggest environmental NGOs, Fundación Pachamama, over a dispute over oil drilling in the Amazon.