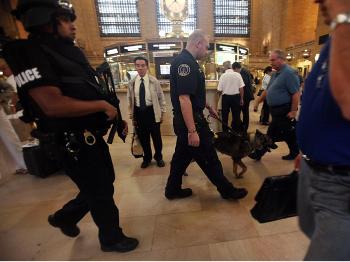 By Julia Kantor
Print
NEW YORK—Midtown Manhattan is getting a security makeover with $24 million being spent on cameras and license plate readers at various locations between 30th and 60th streets. Private sector personnel will also be contracted to work with the New York Police Department (NYPD) to analyze the surveillance data.

The Midtown plan is an expansion of the ongoing Lower Manhattan Security Initiative that aims to infuse the Financial District with an extensive network of security cameras, license plate readers, and chemical, biological, and radiological sensors for detection of potential terrorist threats.

The initiative was established in 2005 with the goal of installing several thousand surveillance cameras and establishing traffic control systems for use in the event of a threat or other emergency.

“We are expanding our state-of-the-art counter-terrorism coordination center to include Midtown Manhattan,” said Mayor Michael R. Bloomberg. “Protecting potential targets is part of the comprehensive strategy we’ve pursued over the past seven and a half years to defend our city,” he added.

Surveillance system blogger Jeff Roush said on a June post that it remains to be seen how cameras, license plate readers, and radiation detectors will deter terrorism.

“The radiation detectors are an interesting proposition, but how can these detectors be effective?” Roush said.

“Does [Police Commissioner Raymond] Kelly believe that a terrorist will be deterred from bringing a dirty bomb into the city by these detectors? What if these terrorists want to use good old fashioned dynamite or a fertilizer bomb as it is a very popular form of terrorist weaponry. Does this mean Mr. Kelly needs to add gunpowder detectors and fertilizer detectors as well?”

“With a combination of high-tech intelligence and old-fashioned policing, we are doing everything in our power to keep our city safe from terrorist threats,” said the Mayor.

“The Lower Manhattan Security Initiative was designed to bring together the private and public sectors to protect the economic heart of the nation,” said Police Commissioner Kelly.

“The awarding of this grant enables us to begin extending its scope to a large swath of Midtown, where the same technologies and partnership at work in the Financial District will be brought to bear on interests and infrastructure there.”