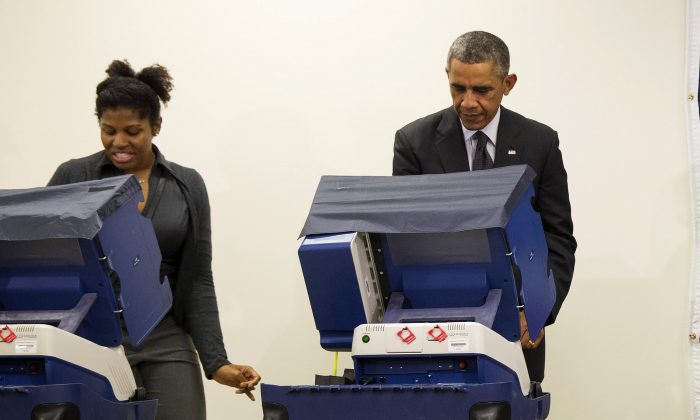 Michelle Obama Told Barack Obama to ‘Get Out’ After President Hit on Engaged Woman: Tabloid

Michelle Obama told Barack Obama to “get out” of their house after she saw him hitting on an engaged woman, according to a new tabloid report.

Michelle was upset that the president, only a few months after allegedly being called a “perv” for peering down a young woman’s dress, was caught in a similar case in Chicago.

Obama was standing next to Aia Cooper as she voted, but her fiance then walked by and said “don’t touch my girlfriend.”

“There’s an example of a brother just embarrassing me for no reason, just for no reason whatsoever,” Obama said later.

News reports played off the incident as “teasing,” but the National Enquirer tabloid says that when Michelle saw the video she “hit the roof.”

“Michelle’s had it. She has warned him plenty of times to keep his hands off women, but he refuses to listen,” a source said.

“When Barack got home, she told him to ‘Get out!'”

The tabloid previously reported that Obama was caught leering at a recent college graduate at a July event in Denver.

“What a perv!” an eyewitness said then.

“The way it’s going, Barack may be living elsewhere by the time his second term ends. Michelle’s about to kick him out for good!” the source said.

And Globe magazine reported in its upcoming November 3rd issue that the Obamas’ “sham marriage” is actually already “over.”

The magazine claimed that the “startling end” comes as Barack was accused of seeking after “yet another” married Hollywood beauty.

It also claims that Michelle has a secret lover in the Secret Service.