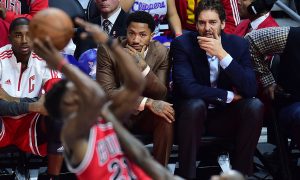 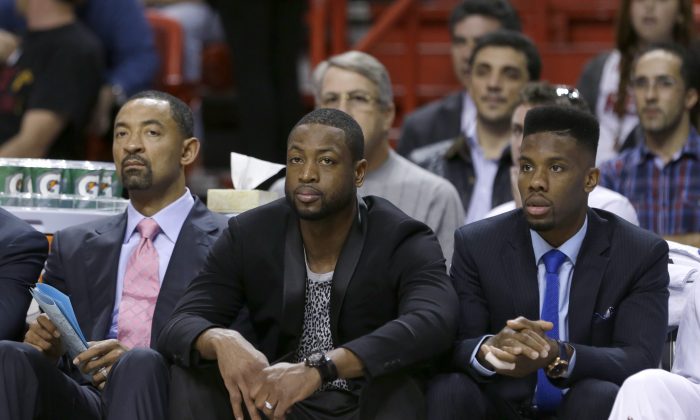 Miami Heat guard Dwyane Wade, center, and guard Norris Cole, look on from the bench with assistant coach Juwan Howard, left, during the first half of an NBA basketball game against the Charlotte Hornets, Sunday, Nov. 23, 2014 in Miami. Wade was out for his sixth straight game as he continues to work his way back from a strained left hamstring, and Cole sat out his second straight game with a dislocated finger. The Heat defeated the Hornets 94-93. (AP Photo/Wilfredo Lee)
NBA

The Miami Heat are preparing for their next game and the news and rumors have been coming out.

Wade Out Against Warriors, Cole to Return

Dwyane Wade will sit out against the Golden State Warriors on Tuesday after participating in a limited fashion in the morning shootaround.

Wade’s sore hamstring has caused him to miss seven games.

Wade’s participation in the morning shootaround was a good sign, as was a “stronger” session later in the day.

Norris Cole, who has a dislocated finger, will play against the Warriors with a splint.

“I’m getting used to the feel of it,” said Cole of his splint, which will have to be worn on a day-to-day basis until the finger is healed enough, to Fox Sports.

“I’m trying to get back as quick as possible and get some basketball moves in so I can see how it’s going to feel during game time.”

Spoelstra said that the MRI on Chris Andersen’s ankle revealed no significant damage but that he’s still out for now.

Your first look at the newest @MiamiHEAT big man @hassanwhiteside. “We feel because of his size, age and skill set that it was the appropriate time (to sign him).” – Coach Spoelstra

Whiteside averaged 22 points, 15.7 rebounds and 5.3 blocked shots in three games with the Iowa Energy of the NBA Development League this season.

He has appeared in 19 previous NBA games, all with the Sacramento Kings, averaging 1.5 points and 2.1 rebounds in those games.

To make room on the roster, the Heat waived guard Shannon Brown, who averaged 4.0 points in five games with Miami this season. He started each of Miami’s last two games, while the Heat have been waiting for Dwyane Wade to recover from a strained left hamstring.

Spoelstra lamented the loss of Brown, while saying the upside of Whiteside isn’t something the Heat wanted to pass up right now.

“We view him as a developmental player even though he’s played professionally for three years,” said Spoelstra. “We still see him as a young prospect. Someone that we can invest our time in and we’ve shown a history of being able to develop players and he’s a big prospect.”

Whiteside told Jason Lieser of The Palm Beach Post that one of his jobs is “dunking on people.”

Lieser said that there’s a good chance the new addition plays against the Warriors.

Mario Chalmers has been doing well as a shooting guard, dropping 20 points and 10 assists against the Hornets on Sunday.

A reader noted to the Sun Sentinel that Chalmers is sometimes the best player on the floor when he’s playing at the 2.

“I think without the responsibilities of having to facilitate as much for others, or cover the backcourt when a shot goes up, it has been liberating for Chalmers,” said Ira Winderman of the Sentinel.

“For years, I have pointed to his innate ability to get to the rim and his passive approach too often against doing so. When Chalmers attacks, or, for that matter any player attacks, it gets the defense moving, which opens opportunities for others. Chalmers in attack mode is significant.

“The problem is the aggression with his ballhandling far from the basket sometimes gets him in trouble, as it almost did (actually did) near the end of the game against Charlotte.”