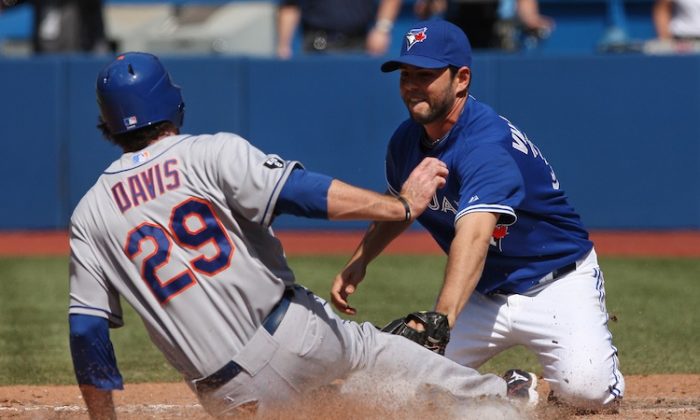 Ike Davis (L) was thrown out at the plate by catcher J.P. Arencibia after attempting to score following a wild pitch. (Tom Szczerbowski/Getty Images)
Baseball

Outfielder Mike Baxter had a single, double, and a triple in four at-bats Sunday as the New York Mets (22–19) held off a late rally by Toronto (23–19) to win 6–5 and avoid the three-game series sweep.

Baxter scored in the first on a double by David Wright after doubling himself to advance leadoff hitter Andres Torres to third. Kirk Nieuwenhuis later doubled in Wright to put New York up 3–0 before starting pitcher Dillon Gee threw a pitch.

Gee got the win (now 3–3 on the season) for the Mets, going six and two-thirds innings, giving up three runs on five hits and four walks while striking out six Blue Jays. The 26-year-old right-hander lowered his ERA to 5.44 on the season and has gone at least five innings in each of his eight starts.

In the second inning Baxter, who has fewer than 100 career at-bats since arriving in the majors in 2010, struck again tripling home Ronny Cedeno to make it 4–0.

Toronto starter Henderson Alvarez settled down a bit after the triple, retiring seven of the next eight hitters. Meanwhile the Blue Jays got on the board after Gee gave up a pair of walks followed by a single in the second.

In the third, Toronto’s power-hitting DH Jose Bautista hit a solo home run, his 11th of the season to cut the lead to 4–2. Bautista, who would add an RBI-single in the seventh inning has averaged 49 home runs each of the past two seasons, but got off to a slow start this season. With three hits Sunday, including two through the hole in the Mets shift, his average is now at .217, which is the highest it’s been since April 20.

The Mets finally chased Henderson Alvarez with a two-run fifth.

For Wright, the two hits on the day pushed his average to .412 on the season—tops in the majors as is his .513 on-base percentage. Conversely, the fielder’s choice by Ike Davis was his 25th out in his last 26 at-bats, and may be causing the talented first baseman to press a little at the plate as the left-handed hitting Davis saw just five pitches in four at-bats on the day.

Davis though stretched a single into a double in his next at-bat that led off the eighth inning—pushing his average up to .163. He then advanced to third on a passed ball by Toronto catcher J.P. Arencibia and then tried to score on a wild pitch by Toronto reliever Carlos Villanueva. The pitch got past Arencibia and went all the way to the backstop but took a hard bounce back to Arencibia who made a great throw to nail Davis at the plate.

The run could have proved costly.

The Mets, up 6–3 at the time, followed Davis’s out with back-to-back singles but were unable to plate either runner.

After Mets reliever Bobby Parnell gave up a pair of runs in the bottom half of the eighth inning that closed the lead to 6–5, Lucas Duda and Kirk Nieuwenhuis both drew walks to put runners on first and second base with one out in the ninth. Toronto, though, was able to strike out both Scott Hairston and Ronny Cedeno to end the inning.

Mets closer Frank Francisco got the save, his 10th of the season, after working a scoreless ninth, which was not without its excitement. The 32-year-old former-Blue Jay allowed the first two hitters in the ninth to reach base before striking out Edwin Encarnacion, J.P. Arencibia, and Eric Thames in succession to end the game and lower his ERA to 8.04 in the process.

Next up for the Mets is a three-game series in Pittsburgh starting Monday as the Mets Johan Santana (1–2) will square off against Erik Bedard (2–5) on Monday.