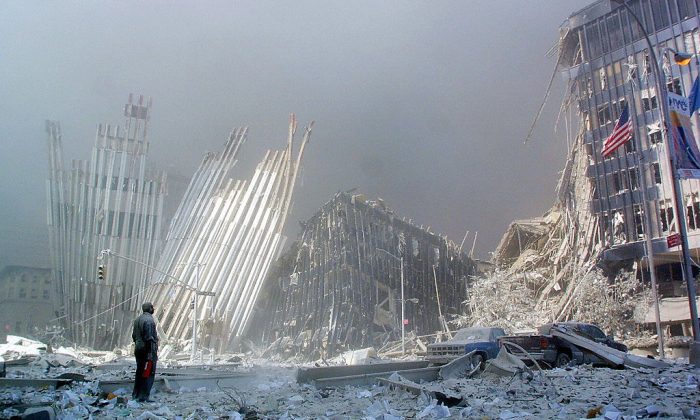 A man standing amid rubble, calling out asking if anyone needs help, following the collapse of the first World Trade Center tower in New York after two hijacked planes crashed into the buildings. (Doug Kanter/AFP/Getty Images)
US

Saudi Arabia government officials were part of a support network for Sept. 11 hijackers, said John F. Lehman, former Republican member of the 9/11 commission, reported The Guardian on May 12.

Lehman also called on the Obama administration to declassify the congressional report, known as the “28 pages” on the al-Qaeda attacks to the United States in 2001.

“There was an awful lot of participation by Saudi individuals in supporting the hijackers, and some of those people worked in the Saudi government,” Lehman told The Guardian, suggesting that the commission may have made a mistake by not being transparent in its final report.

“Our report should never have been read as an exoneration of Saudi Arabia,” said Lehman, an investment banker in New York who was Navy secretary in the Reagan administration.

The 9/11 attacks were carried out by 19 terrorists, 15 of them were citizens from Saudi Arabia.

Lehman told “60 Minutes” last month “it was no accident that 15 of the 19 hijackers were Saudis. They all went to Saudi schools. They learned from the time they were first able to go to school of this intolerant brand of Islam.”

His comments mark the first major public split among the 10 commissioners since they released the final report in 2004.

Lehman was also critical of remarks made last month by the former chairman and vice-chairman of the commission, who warned the Obama administration to be cautious about disclosing the full 28 pages on the Saudis and 9/11, claiming the report contained “raw, unvetted” material that might affect innocent people.

Gov. Tom Kean (R-N.J.), and vice-chairman, along with former congressman Lee Hamilton (D-Ind.), praised the Gulf nation as “an ally of the United States in combating terrorism.”

They also said the commission’s investigation, which came after the congressional report was written, identified only one government official from Saudi Arabia. The official who they say was “implicated in the 9/11 plot investigation” was identified as Fahad al-Thumairy, a former diplomat in the Saudi consulate in Los Angeles.

Al-Thumairy was deported from the United States and was not charged with a crime, although he was allegedly involved in a support network linked to two Saudi Arabian hijackers who lived in San Diego a year before the terrorist attacks.

Lehman told The Guardian that Kean and Hamilton’s statement in which they say al-Thumairy was the only Saudi government official connected to the hijackers in California and elsewhere was a “game of semantics.”

Lehman also said the commission had knowledge of at least five other Saudi government officials who were strongly believed to be part of the support network for the terrorists.

“They may not have been indicted, but they were certainly implicated,” he said. “There was an awful lot of circumstantial evidence.”

Lehman also said he did not believe the royal family in Saudi Arabia or the country’s senior civilian leadership had any part in supporting al-Qaeda or the 9/11 plot.

Lehman has support among other report commissioners.

Former Democrat Senator Bob Graham, who co-chaired the congressional inquiry and has also read the document, told CNN the pages point to “a connection at the highest levels between the Kingdom of Saudi Arabia and the 19 hijackers.”

Graham also said the United States covered up the link in order to protect its relationship with a key Middle East ally.

Meanwhile, the Saudi government strongly denies having part in the attacks and says it would welcome the release of the 28 pages to stop speculation.

Former President George W. Bush decided not to release the pages, since it could reveal intelligence sources and methods.

However, President Obama hinted that at least parts of the report, which includes information on the attacks that killed nearly 3,000 people when hijacked planes flew into the World Trade Center, the Pentagon and a Pennsylvania field, may be released shortly.