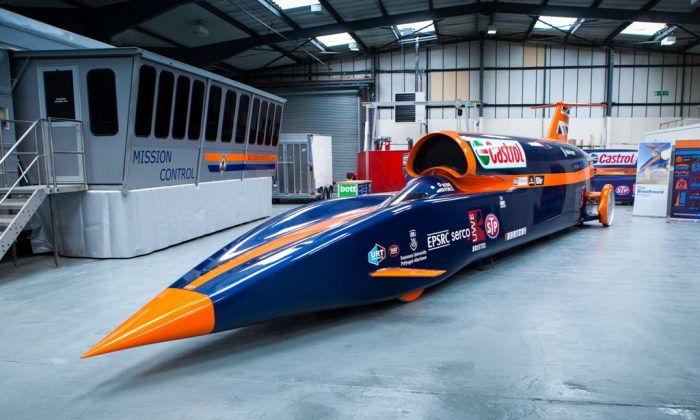 Designed to go faster than sound, the Bloodhound SSC is a 135,000-horse-powered beast of a vehicle that is currently in development. With a target to break the land speed record and reach 1,000 miles per hour (1,609 km/hr), the supersonic Bloodhound is fitted with a Cosworth CA2010 Formula One V8 petrol engine auxiliary power unit powered by a rocket and jet engine, and is capable of delivering Mach 1.4.

Shaped like a missile, the vehicle is 45 feet (14 meters) in length and has dual in-built front wheels combined with 2 external rear wheels. The 36-inch wheels will rotate at 10,200 rpm and they are forged of solid aluminum. The Bloodhound weighs over 7 tons and has the power equivalent of all the Formula One cars on a starting grid combined—then multiplied by six. It’s like a fighter jet combined with a racing car.

Thefirst runway testing is expected to begin in 2016 in Northern Cape, South Africa. The testing ground has been selected in the Hakskeen Pan in the Mier area, where a 12-mile track has been cleared for the initial testing.

Wing Commander Andy Green has been chosen as the driver for the record-breaking venture. He will lie feet-first inside the cabin, and, upon reaching speeds of 1,000 mph, which is expected in 42 seconds, he will start experiencing extreme G-forces of 2.5g that will rush blood into his head. To slowing down, he will deploy air-brakes at 800 mph, then parachutes at 600 mph, and finally disc brakes at 250 mph. The deceleration will cause the blood to rush to his feet, which may result in driver blackout.

The former Royal Air Force pilot is practicing for the drive in a stunt aircraft. He is flying upside down over the British countryside to get used to the extreme G-forces.

The customized cockpit of the Bloodhound SSC has been completed recently. It has taken more than 10,000 hours to design and manufacture the hand-crafted structural shell, made up of carbon fiber and an aluminum honeycomb core with varying thickness.

The windscreen, made of acrylic, is thicker than that of a fighter jet. Ballistic armor protects the driver from loose debris with a series of shockwaves to slow down air while channeling it into the Rolls Royce-based EuroJet engine.

Wing Commander Green will only be able to look ahead through a 2-inch (5 centimeter) opening due to the unique size of the contraption. The Rolex speedometer reads up to 1,100 mph and is fitted next to an analog chronometer with stopwatch, just in case the digital display fails.

The Bloodhound project is intended to influence the new generation to take interest and pursue careers in engineering, technology, science, and mathematics.

Check out Wng Cmd Green’s diary for the latest news and developments regarding the project.