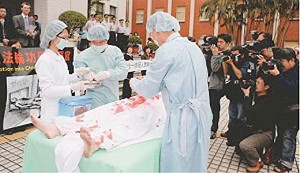 The communist China State Council announced its first Human Organ Transplant Regulation on April 6, 2007. The regulation indicated that no organization or individual is allowed to sell or buy organs for profit.

Dr. Huang Shih-Wei, an urologist from Chiayi, Taiwan, has been following organ transplant development in China and Taiwan for several years. Dr. Huang pointed out that the most conspicuous problem for China's organ transplant system is that the sources of the organ are unclear.

Sources show that most organ transplants in China take place in military hospitals, which are not under the jurisdiction of the Chinese State Council and Health Ministry.

Dr. Huang said the most ethically questionable fact about the Chinese Communist Party's (CCP) organ transplant system is that the sources of the organs are unclear. A report by two Canadian independent investigators reported that between 2000 and 2005, there were 45,000 organ transplants from undisclosed sources, while another 15,000 organs were thought to be from executed prisoners. The Medical Ethics Commission does not have jurisdiction over organs from unidentified sources.

In the past, there were very few cases of organ donations from living and brain-dead donors in China. The Medical Ethics Commission does not need to give approval since there are no such cases.

The new regulation requires organ donation authorization form, but such an authorization is just a piece of paper, since the regulation is unable to control the authorization and under what circumstances it is obtained. Many say that the CCP forced, induced or forged such authorizations in the past. A regulation will not resolve public suspicion over past practices by the CCP.

The China State Council regulation states that hospitals performing transplants must meet certain criteria. For example, clauses 11 and 14 detail the qualification approval process. From the provision, one can infer that the Chinese government may want to reduce the number of hospitals that are qualified to perform organ transplants.

However, considering the severe and pervasive corruption in China, it is questionable whether such provisions would truly improve the quality of organ transplants, or it may become another way for officials to embezzle while hospitals fight for the qualification.

Dr. Huang said the revised report by the two Canadian independent investigators clearly indicated that the main sources for China's organ transplant are from the military medical system. The two investigators found compelling evidence that the Chinese military hospitals were involved in organ harvesting from living Falun Gong practitioners.

China's communist political system is different from that of other countries. In China, the army is controlled by the Central Military Commission of the CCP, not by the State Council. Similarly, military hospitals are managed by the People's Liberation Army General Logistics Department.

Last November in a speech during the National Organ Transplant Management Summit in Guangzhou, Deputy Minister of Health Huang Jiefu admitted that his Health Ministry had no control over military hospitals.

Many organ transplant agents unequivocally claimed that one must look to the military hospital system for organs, and that civilian hospitals do not have the infrastructure to obtain organs. The statements of these agents agree with the findings in the Canadian investigators's report.

To resolve the crucial issues related to organ transplants in China, the following must goals must be set:

The focus on the unclear source of the organ harvesting is because they suspect that the military system harvests organs from Falun Gong practitioners and executed prisoners. The military medical system is independent from the Health Ministry. The two Canadian investigators provided some insights on how to resolve this problem:

However, all these problems are not under the control of Health Ministry or State Council.

In Taiwan or other countries, it is very important to set up a system to register and assign organs for transplant. It is clearly required by Taiwan's Organ Transplant Regulation. This is necessary to maintain ethical accountability and transparency of organ transplants. However, in China organ transplants are used as a tool for profit-making by medical institutions. There is even competition among hospitals to obtain organs.

If China's government truly wants to eliminate such a phenomenon, they should set up a system to register and assign organs for transplant. Even if it does not measure up to acceptable standards for organ transplantation, at least it must require all medical institutions to register the organ transplant cases. Nevertheless, it is important to set up such a system because many Chinese officials and medical professionals are not willing to give up the considerable profits they are making.

There is only one clause in the newly published Organ Transplant Regulation—clause 22 that requires a waiting list for patients in need of organ transplant and provides that Ministry of Health will make rules for fair and open organ assessment on the basis of medical needs.

If such rules are only a principle for hospitals to follow on a voluntary basis, then the rules are useless. A system to register and assign organs for transplant should be required, whether at national or local levels.

For the records about organ transplant, it is most important to preserve the information about the organ donor and recipient. There is no record keeping clause in the regulation at all, which means forced donors's remains are very likely to be destroyed.

There are several common phenomena among Taiwanese patients who went to China for organ transplant. First, many patients used fake names and addresses. Second, patients who did not survive the organ transplant would be cremated immediately and all the documents including death certificates and medical records would not mention organ transplant at all. Last, all the patients were required to pay cash and there were no official receipts.

Based on these, we suspect that all the organ transplant records in China's hospitals are destroyed; this is not good for either the patient's rights protection or investigation.

There are laws in China in many other fields but the CCP chose not to follow them. For example, the Chinese Constitution clearly states that its people enjoy freedom of religions and democracy, yet the Tiananmen Square Student Movement in 1989 was suppressed with tanks and guns. In addition, Falun Gong practitioners, members of underground Christian churches, Catholics and human rights advocates all have suffered tortures and persecution in China.

Mr. Huang said, “In summary, I don't expect such a regulation could resolve the problems related to organ transplants in China.”