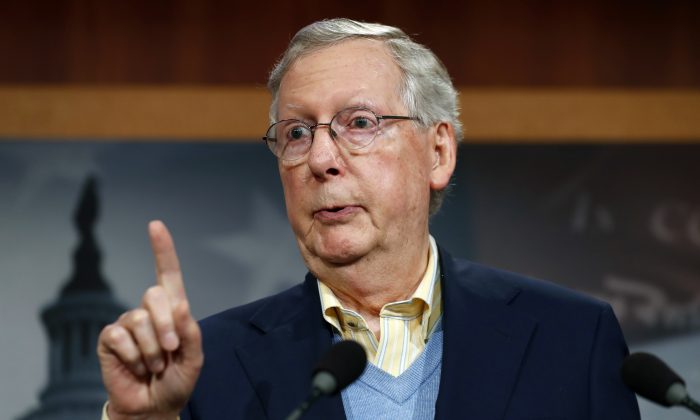 The chamber’s Democrats replaced their departing leader with Sen. Chuck Schumer, meaning the New Yorker will be Washington’s most powerful Democrat as the party confronts a Republican-dominated government.

McConnell is widely popular among his GOP colleagues and his selection was never in doubt. The 74-year-old has a genteel manner but has proven to be a coolly effective leader, steering his party through a long battle over a Supreme Court vacancy and the stormy—though ultimately successful—presidential candidacy of Trump.

McConnell and Schumer were both elected unanimously at separate closed-door meetings.

McConnell was Senate minority leader for eight years before becoming majority leader when the GOP took control in 2015.

He’s pushed a conservative agenda while cutting budget deals with President Barack Obama. And he enraged Democrats by refusing to let the Senate consider Obama’s nomination of federal judge Merrick Garland to fill a Supreme Court vacancy that occurred last February. That move paid dividends when Trump was elected.

McConnell distanced himself from Trump during the campaign, at times flatly refusing to discuss the race with reporters. But he says he’s ready to work with him.

Schumer, 65, will replace the retiring minority leader, Sen. Harry Reid of Nevada. Schumer has been No. 3 Democratic leader and vaulted over No. 2 leader Dick Durbin of Illinois, who will remain in that slot.

Schumer will lead Democrats’ last line of defense against the Trump White House and GOP-controlled House. Senate Democrats—outnumbered 52-48, including two independents who back Democrats—could prevent McConnell from getting the 60 votes he’ll need on some important issues.

It won’t always be possible for Schumer to keep Senate Democrats together because many of them will seek re-election in two years from GOP-leaning states.

Schumer has said he’ll seek opportunities to work with Trump but will face pressure from disappointed Democratic activists to adopt a hard line. It’s unclear how he’ll balance the demands of progressive Sens. Elizabeth Warren, D-Mass., and Bernie Sanders, I-Vt., against red-state senators facing re-election in 2018 and needing protection from politically damaging votes.

Schumer has a history of being a savvy partisan combatant willing to strike compromises, such as on a 2013 bipartisan immigration overhaul that ended up dying.

The lack of drama as senators chose their leaders was the opposite of the House, where both parties’ leadership elections have been more theatrical.

Ryan will need 218 votes—a majority—to be approved when the full, new House convenes Jan. 3. With the GOP on target to have 241 seats next year, Ryan can afford just 23 defectors, but many Republicans expect Ryan to be safe in the GOP afterglow of Trump’s win.

Aiding Ryan: Support from Trump and Vice President-elect Mike Pence, which Ryan and others underscored to Republican lawmakers before they voted.

Sen. McConnell Gives Strongest Statement yet in Favor of Trump

“The momentum is with us,” Rep. Mick Mulvaney, R-S.C., said in an interview after nominating Ryan during Tuesday’s closed-door meeting. “The last thing we need is to distract attention right now with a leadership fight. We’re all pulling in the same direction.”

Mulvaney is in the tea party-leaning House Freedom Caucus, which has frequently rebelled against GOP leaders.

At a meeting of House Democrats Tuesday, Pelosi told her colleagues “we’ve been through hell” with the election and that Democrats should draw contrasts with Trump, according to an aide in the room.

But all were not happy.

“Everything’s not good. Business as usual is not going to work,” said Rep. Ruben Gallego, D-Ariz., among those who pushed for the delayed leadership vote.