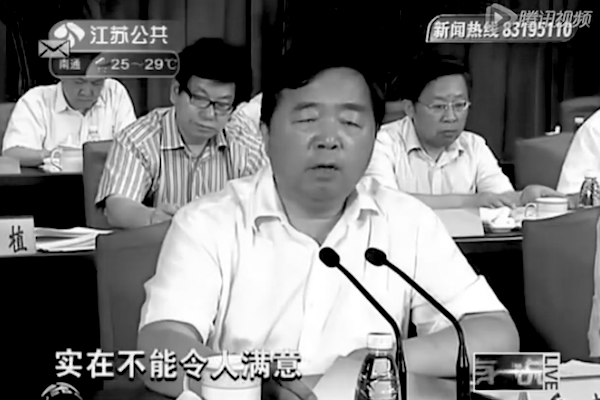 A screenshot of a Chinese official news report shows Ji Jianye, the mayor of Nanjing in eastern China's Jiangsu Province, giving a speech about road construction in Nanjing in August, 2012. Ji Jianye has been placed under investigation for severe violation of discipline and law on Oct. 17, according to Chinese Ministry of Supervision. (dzgbw.com/Screenshot/Epoch Times)
China

Mayor of Nanjing, Friend to Former Chinese Leader, Is Investigated For Corruption

The mayor of the eastern Chinese city of Nanjing is being investigated for corruption, according to official Chinese media on Oct. 17, making him the latest high-level official to be taken down under Party leader Xi Jinping’s anti-corruption campaign, and the latest cadre with ties to former communist leader Jiang to be purged.

The Chinese regime’s Ministry of Supervision published a one-sentence announcement on Oct. 17, saying the mayor Ji Jianye has been placed under investigation for “suspected severe violations of discipline and law,” which is usually code for corruption.

Ji Jianye was investigated for economic issues, Party mouthpiece People’s Daily later reported. Ji may have been involved in the embezzlement or reception of bribes of more than 20 million yuan ($3.3 million), the report said, citing Nanjing news media.

The 56-year-old Ji became the mayor of Nanjing, capital of Jiangsu Province, in January 2010. Under his charge the city government invested heavily in a number of capital projects, including cutting down trees, demolishing roads, and diverting rain and sewage drains. The constant construction activity in the ancient city, however, aroused angry complaints from residents, according to People’s Daily, the Communist Party’s newspaper.

Between 2001 and 2009, Ji Jianye was party boss of Yangzhou City, near Nanjing, also the hometown of former party leader Jiang Zemin.

Being an official in Yangzhou meant many opportunities to establish close ties with Jiang Zemin and Jiang’s family, considered in official circles one of the most reliable and fastest ways to climb up the bureaucratic ladder in Jiangsu Province, according to overseas Chinese-language media Duowei.

In 2005, retired Jiang was accompanied by Ji Jianye, Party Secretary of Yangzhou at the time, while visiting Jiang’s hometown. The visit was covered in the Chinese media as a demonstration of their ties.

Jiang Zemin once gave Ji high praise, saying he’s an “official who cares like a parent,” according to Duowei. Ji benefited from his close ties with Jiang in being made the mayor of Nanjing, according to the narrative widely accepted in Hong Kong media.

The anti-corruption campaign is a form of political purge in the Chinese Communist Party, Wu Fan, political commentator and rights activist based in the United States, told Sound of Hope radio.

“By promoting anti-corruption, fighting the big tigers, Xi Jinping is eliminating political enemies. In this way I’m sure there will be more officials brought down, in order to redistribute the profits these posts bring.”

Party leader Xi Jinping vowed to fight against corruption during a Party disciplinary meeting earlier this year, saying “We must have the resolve to fight every corrupt phenomena, punish every corrupt official, and constantly eradicate the soil which breeds corruption,” Party mouthpiece Xinhua reported.

At least ten high-level officials have been brought down this year, including Ji Jianye, according to Caixin, a business magazine. Many of them have had ties to Jiang Zemin, or are understood to have been part of Jiang’s expansive patronage network.