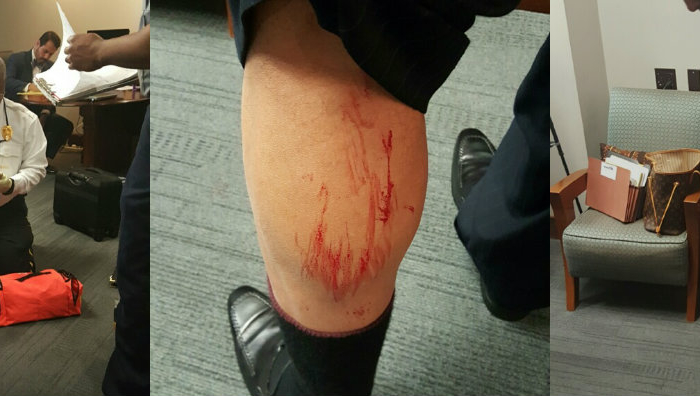 Mayor of Alabama and Council Member Involved in Bloody Fight

Tensions between mayor of Birmingham, Alabama, and a city council member escalated into a physical fight on Tuesday morning, sending both of the men to the hospital.

The report lists the mayor as the victim and Lundy as the offender. Lundy will be charged with third-degree assault, it added.

The two got into a physical altercation in the council chambers and away from the public view. Both intend to press charges against one another.

AL.com reporter John Archibald tweeted that “people overheard the mayor yelling ‘no no no’ from inside the room.”

It’s unclear why the men were fighting, but City Council President Johnathan Austin blamed the fracas on Mayor Bell, describing it as a “sad day when council members are attacked while trying to do the job that they were elected to do,” according to a statement released by the Council. “What occurred at City Hall today is a direct reflection of the lack of respect towards the Council and unwillingness to cooperate which has been ongoing for some time now,” it reads.

A photo of Lundy showed his leg scratched up and covered with blood, which Austin issued to reporters.

From Chief Roper on altercation between mayor bell and councilor Lundy: #Birmingham pic.twitter.com/lrSMdCi0aM

The mayor’s office said an arrest warrant will be sent out for Lundy. “It’s extremely concerning, not just for me, but for our entire city so we’ll conduct a thorough investigation and try to get to the bottom of exactly what happened and what precipitated this incident,” Birmingham Police Chief A.C. Roper told reporters.

The office added: “The Mayor is currently recovering at a local area hospital. A formal police report has been initiated and will be ready for release in the next hour. From there, the magistrate will swear out a warrant for the arrest of Councilor Lundy. When approached by Birmingham Police, Councilor Lundy refused to give a statement. Will send more information as we have it,” according to WTVM.com.