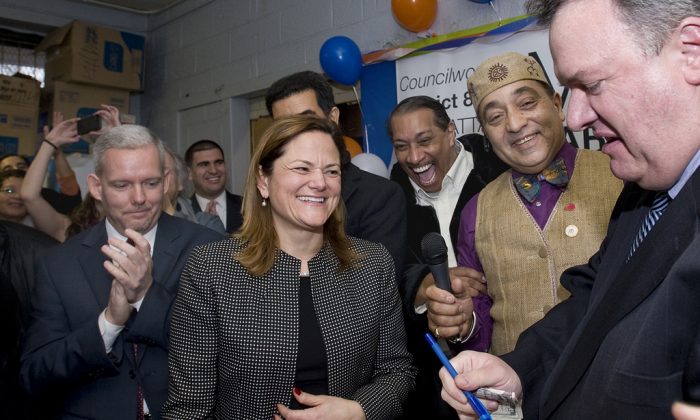 NEW YORK—A day before the City Council vote for its next speaker, Mayor Bill de Blasio rejected a comparison that his working relationship with Melissa Mark-Viverito would resemble that of former Mayor Michael Bloomberg and former Council Speaker Christine Quinn.

“If people want to make the parallel they can, I understand that is what people see as logic. I think they are profoundly different realities, I won’t go into detail,” said de Blasio speaking at press conference at City Hall Jan. 7.

During the mayoral primary de Blasio criticized Quinn for being in Bloomberg’s pocket, a perception generally regarded as the reason for Quinn’s loss in the primary.

When asked about how he had vetted Mark-Viverito before supporting her for speaker, de Blasio cited working “shoulder to shoulder with her in the City Council.”

For a second day following a report by the Daily News, de Blasio defended Mark-Viverito’s failure to disclose rental income as an understandable oversight.

Many Council members were mum Tuesday. Some reiterated their support for Mark-Viverito, asserting she would maintain her independence.

“I am confident she will be an independent speaker who will aggressively protect and defend the City Council,” said Julissa Ferreras in a statement. Ferreras said she has worked alongside Mark-Viverito in the last four years of her first term. She said that Mark-Viverito “has also proven herself a qualified, independent voice.”

Incoming Councilwoman Helen Rosenthal of Upper West Side also reaffirmed her support for Mark-Viverito’s candidacy. Rosenthal said she has worked closely with Mark-Viverito when she chaired Community Board 7, particularly during the participatory budgeting process. She spoke highly of Mark-Viverito’s dedication to her constituents, saying she will be independent and transparent.

“We’ve all seen Melissa to be an independent thinker,” said Rosenthal.

Staten Island Republican Minority Leader Vincent Ignizio chose not to comment on the contentious nature of the race for speaker.

“Everyone should go to City Hall tomorrow and vote his or her conscience, without fear of reprisal. The most important part of this process is to come together as a body and do the job the people of New York City elected us to do,” Ignizio said in a statement.