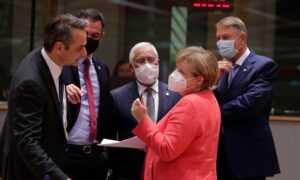 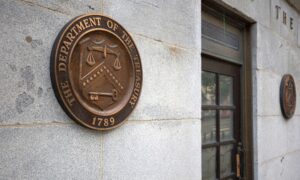 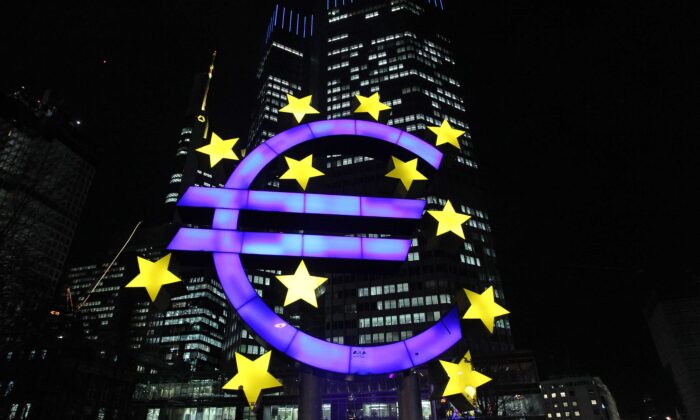 The Euro logo is seen in front of the European Central Bank (ECB) in Frankfurt am Main, Germany, on Jan. 10, (Daniel Roland/AFP via Getty Images)
Viewpoints

The European Central Bank’s (ECB) balance sheet has risen to 53.9 percent of GDP in July. That compares to a 32 percent for the Federal Reserve and 33 percent for the Bank of England. This means a 1.78 trillion euro ($2.11 trillion) increase year-to-date.

Furthermore, excess liquidity has soared to 2.9 trillion euros ($3.4 trillion), a 1.2 trillion increase since January. Added to this unprecedented monetary stimulus, the eurozone has included a record-high 10 percent of GDP in various fiscal stimulus programs.

None of it has prevented the economy from showing signs of slowing in August.

After a strong bounce in May and June, coming from the reopening of most economies and the base effect, high-frequency data compiled by Bloomberg Economics shows an evident slowdown in July and August. All economists that follow the eurozone economy are warning about the worrying weakening of leading indicators.

The Organization for Economic Co-operation and Development (OECD) has also published its July 2020 Leading Indicator Index, which shows that economies such as Spain aren’t just showing signs of weaker growth, but contraction. Italy continues to improve but at a slow pace, while France and Germany post declining growth levels.

The reason is evident. All the eurozone monster stimulus is focused on perpetuating bloated government budgets and incentivizing non-economic return or subsidized spending. The entire European Recovery Fund is clearly aimed at promoting white elephants disguised as green projects, but what is more concerning is that the eurozone green deal includes more taxes and measures to prevent demand growth than productivity-enhancing plans.

This lesson should have been learned in 2009. The European Union launched its massive Growth and Jobs Plan, which rose to more than 1.5 percent of the EU GDP, and the economy didn’t improve, while more than 4.5 million jobs were lost.

The problem of these massive stimuli is that they benefit the wrong parts of the economy. Current government spending on entitlements and subsidies creates massive deficits, and the corporations that take advantage of the massive private bond purchases and liquidity injections are the large multinationals and national champions that didn’t have any problem accessing markets in the past.

While the eurozone is raising “environmental” taxes to citizens and promoting subsidized spending in “the new green deal,” the biggest beneficiaries of the ECB corporate bond purchase program are large automotive companies, oil and gas multinationals, and big multi-utilities. The ECB has bought bonds from Shell, Eni, Repsol, OMV, Total, Siemens, Daimler AG, BMW, Volkswagen, Renault, etc. None of these companies had any difficulty accessing capital markets or issuing debt at low rates, and their bonds couldn’t be categorized in any way as cheap, considering the yields and spreads.

Most of these companies have established and mature businesses in sectors where overcapacity and margin challenges existed way before the previous and current crisis, so they won’t increase hiring or capital spending due to the monetary stimulus.

Meanwhile, thousands of start-ups and small businesses with no access to credit because they have no hard assets are collapsing every month. The monster credit support coming from the transmission mechanism of monetary policy is hoarded by governments and multinationals. It’s a massive incentive to overspend and malinvest. Governments feel happy adding more current spending and entitlements with no real economic return, and traditional multinationals that were in slowdown phase years ago are zombified by low rates.

The ECB and eurozone stimulus plans end up as massive subsidies to low productivity with collateral damage to high-productivity sectors in the shape of higher taxes.

The reader may think that the same can be said about the United States and what the Federal Reserve does. Yes, to a certain extent. The main—and vital—difference is that the United States monetary policy transmission mechanism doesn’t depend on the commercial bank channel. Less than 15 percent of the United States’ real economy is financed by the banking sector, because of a diversified and flexible private credit system. In the eurozone, it is more than 80 percent, similar to Japan.

This path to long-term stagnation should serve as a reminder for the United States, again, of why it isn’t advisable to follow the eurozone policies. The results are invariably disastrous.