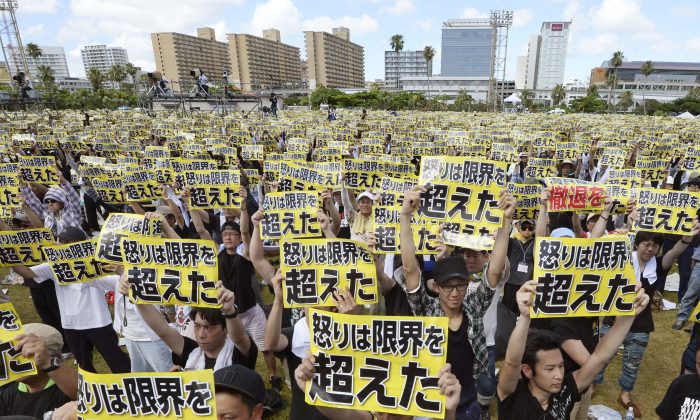 Protesters hold placards that read: "Our anger has reached its limit" during a protest rally against the presence of U.S. military bases on the southwestern island of Okinawa in Naha, Okinawa, on June 19, 2016 as many of them wearing black to mourn the rape and killing of a local woman in which a former U.S. Marine is a suspect. The rally called for a review of the U.S.-Japanese security agreement, which burdens Okinawa with hosting the bulk of American troops in Japan. (Ryosuke Uematsu/Kyodo News via AP)
Asia & Pacific

Massive Protest on Okinawa Opposes US Military After Killing

TOKYO—Tens of thousands of people on the Japanese island of Okinawa protested Sunday against the presence of U.S. military bases there, many wearing black to mourn the rape and killing of a local woman in which an American contractor is a suspect.

The rally called for a review of the U.S.-Japanese security agreement, which burdens Okinawa with hosting the bulk of American troops in Japan. Also contentious is a plan to relocate a Marine Corps air station to a less-populated part of the southwestern island. The relocation plan developed after public anger erupted in 1995 over the rape of a girl by three American servicemen.

The killing of the local woman, who had been missing for several weeks when her body was found last month, set off outrage on Okinawa, where tensions periodically run high over crime linked to American troops. The U.S. contractor, a former Marine, was arrested on May 19 on suspicion of abandoning the woman’s body, but has not yet been charged with killing her.

Okinawa Gov. Takeshi Onaga told the crowd at the rally in Okinawa’s capital, Naha, that he wanted to apologize to the woman for failing to protect her, even after what happened in 1995.

“We had pledged never to repeat such an incident,” he said. “I couldn’t change the political system to prevent that. That is my utmost regret as a politician and as governor of Okinawa.”

About 65,000 people attended the rally, according to the Kyodo News agency. Many people held signs demanding the Marines leave and the overall military on Okinawa be scaled back.

Prime Minister Shinzo Abe’s government is behind the security agreement with the U.S., and wants Japan to take on a bigger military role on the international stage. But those at the rally said they wanted a more peace-oriented Japan.

“This is not how we want the country to be,” said university student Jinshiro Motoyama. “We want the bases gone.”

A rally was also held in front of the prime minister’s residence in Tokyo, drawing about 10,000 people, timed to coincide with and show support for the Okinawa rally.

The U.S. military has periodically tried to ease tensions on Okinawa, and says the crime rate among its ranks is lower than among the general public.

Earlier this month, the U.S. Navy imposed a drinking ban after an American sailor was arrested on suspicion of drunken driving on Okinawa, driving the wrong way on a freeway and crashing into two vehicles, injuring two people. The restriction was recently eased.

Last month, Lt. Gen. Lawrence Nicholson, the commanding general of Marine Forces Japan, stressed the importance of the bilateral alliance. “Please do not allow this terrible act of violence to drive a wedge between our two communities,” he said on Okinawa, referring to the woman’s death. “There may be issues we differ on. But we must continue to talk. Let’s keep those lines of communication open.”

But Jeff Kingston, a professor of Asian history at Temple University in Tokyo, said resentment about the bases will likely continue on Okinawa, adding that he believes the base relocation project may be delayed.

“I think they just feel so frustrated,” he said of residents of Okinawa. “These protests are not just going to go away.”