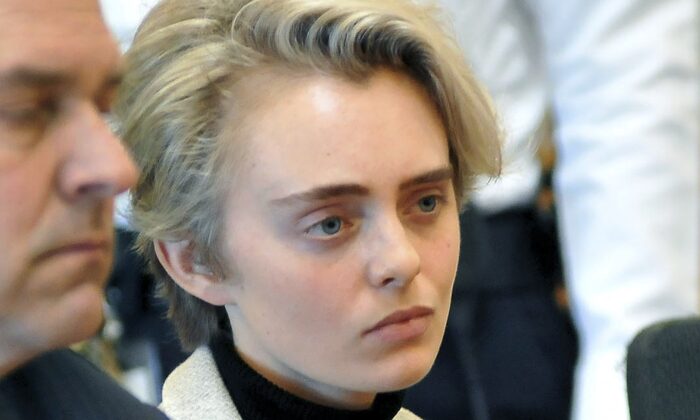 Michelle Carter, the Massachusetts woman who encouraged her boyfriend to kill himself, was released from prison on Thursday morning after spending less than a year behind bars.

Carter, 23, was released months early on good behavior after having been sentenced to 15 months in prison, according to Jonathan Darling, spokesman at the Bristol County Sheriff’s Office.

“Ms. Carter has been a model inmate here at the Bristol County House of Corrections. She has participated in a variety of programs, held a job inside the jail, has been polite to our staff and volunteers, has gotten along with the other inmates, and we’ve had no discipline issues with her whatsoever,” Darling told CNN.

According to video footage from local media, she left the Bristol County House of Correction at about 9:30 a.m. WHDH reported that she wearing a black turtleneck, a tan blazer, and black pants. Those were the same clothes she wore when she was sentenced months ago.

“After she convinced him to get back into the carbon monoxide filled truck, she did absolutely nothing to help him: she did not call for help or tell him to get out of the truck as she listened to him choke and die,” Justice Scott Kafker wrote in the state Supreme Judicial Court’s decision, reported The Associated Press.

It comes after the U.S. Supreme Court on Jan. 13 rejected an appeal from Carter’s legal team. Her lawyers had asked the Supreme Court to take up her case and argued that her conviction three years ago violated her First Amendment rights. In February 2019, after an appeal, the highest court in Massachusetts upheld her conviction.

Prosecutors said Carter, in 2014, had pressured her boyfriend, Conrad Roy III, into killing himself even after he expressed hesitation.

“I thought you wanted to do this. The time is right and you’re ready, you just need to do it! You can’t keep living this way,” she wrote in one text message to him.

Prosecutors also said Carter listened over the phone while he died of carbon monoxide inhalation in his truck, adding that she did not tell Roy’s parents or authorities after his death.

“Although we are very pleased with the verdict, in reality there are no winners here,” prosecutor Katie Rayburn told reporters at the time. “Two families had been torn apart and will be affected by this for years to come. We hope verdict will bring some closure… It’s been an extremely emotionally draining process for everyone involved.”

Carter’s lawyers argued she was being dragged into participation in Roy’s suicidal tendencies and said he was intent on killing himself.

“The evidence actually established that Conrad Roy caused his own death by his physical actions and by his own thoughts,” defense attorney Joseph Cataldo said, according to CNN. “You’re dealing with an individual who wanted to take his own life. … He dragged Michelle Carter into this.”