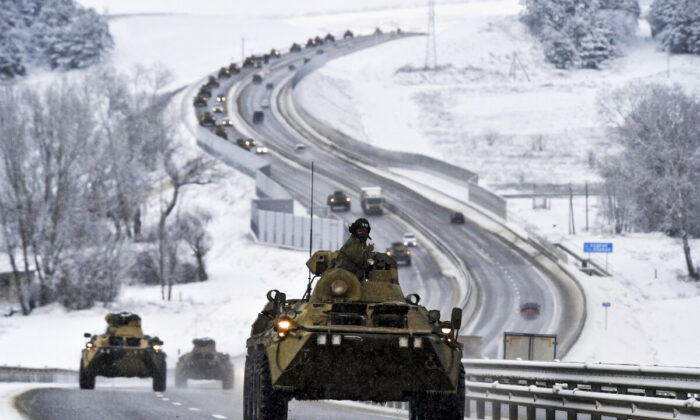 A convoy of Russian armored vehicles moves along a highway in Crimea on Jan. 18, 2022. (AP Photo)
Business & Markets

European and Russian stocks rallied while oil prices retreated on Tuesday morning after Russian officials said some of the country’s troops were being returned to bases after drills near the Ukraine border, with markets welcoming the declaration as a sign that a military conflict may be averted.

“The units of the southern and western military districts, having completed their tasks, have already begun loading onto rail and road transport and will begin moving to their military garrisons today,” Russia’s Defense Ministry spokesman Igor Konashenkov said in a statement.

The announcement came after weeks of heightened tensions as Western leaders warned that Russian forces were poised for an imminent invasion of neighboring Ukraine.

While it is unclear how many troops Russia is withdrawing, Konashenkov suggested that other Russian units stationed near Ukraine’s border would follow suit.

“As the combat training measures are completed, the troops, as always, will make marches in a combined way to the points of permanent deployment,” he said.

Material signs of hope for de-escalation came on Monday when Russian Foreign Minister Sergey Lavrov indicated that Moscow was ready to keep talking about the security grievances that have fed into the crisis.

Russia, which has amassed some 130,000 troops near its border with Ukraine, has repeatedly denied any plans of attacking the country and has asked the United States and its allies for a binding commitment that they won’t accept Ukraine into NATO. Moscow also wants the alliance to halt weapons deployments to Ukraine and roll back its forces from Eastern Europe.

The talks “can’t go on indefinitely, but I would suggest to continue and expand them at this stage,” Lavrov said at a made-for-TV meeting with Putin that seemed designed to convey to the world the Russian leader’s position. In his comments, Lavrov noted that Washington has offered to discuss limits for missile deployments in Europe, restrictions on military drills, and other confidence-building measures.

Despite the hopeful signs, however, the United States and European countries have kept up their warnings.

“The path for diplomacy remains available if Russia chooses to engage constructively,” White House deputy press secretary Karine Jean-Pierre said. “However, we are clear-eyed about the prospects of that, given the steps Russia is taking on the ground in plain sight.”

British Foreign Secretary Liz Truss said Tuesday that an invasion risk remains, telling Sky News that it “could be imminent.” She added that “there is still time for Vladimir Putin to step away from the brink.”

Taylor added that sanctions would also target Russia’s three biggest banks, “and this will have an incredible effect on the Russian economy,” adding, “sad to say, it will affect Russian citizens, Russian people, not just Putin.”