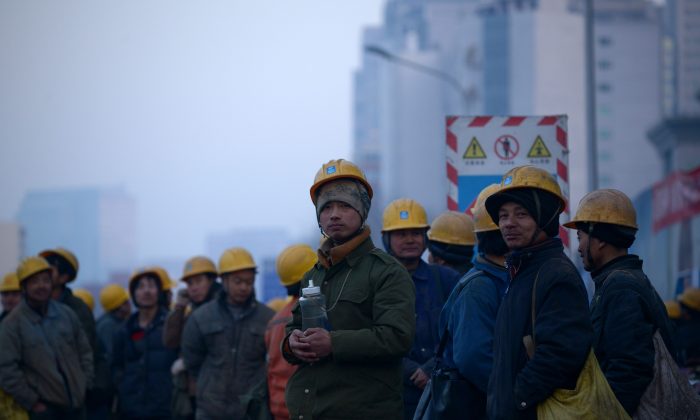 A group of workers wait outside of a construction site in Beijing Dec. 28, 2015. (Wang Zhao/AFP/Getty Images)
China

Market Forces Could Push China to the Brink

Beijing needs to resolve the country’s mounting debt problem, which is tied to its inefficient public sector. Yet it needs to keep up economic and jobs growth, so it cannot simply dismantle its state-owned enterprises. In recent months, it also had to defend its currency in the face of mounting capital outflows.

Thus far, China has seemingly pulled a rabbit out of its hat each year, defying analyst expectations of a hard landing by applying incremental stimulus. That only helps inefficient large state-owned enterprises (SOEs), delaying turmoil in the short term at the expense of future economic collapse and gradual loss of credibility.

But this strategy is quickly proving untenable as, increasingly, market forces exert an undeniable impact on the Chinese economy in ways the Chinese Communist Party cannot control.

Last week’s selloff in Chinese equities came after Beijing finally guided its currency lower—but its timing couldn’t have been worse.

Over the past few months, authorities had to demonstrate a stable yuan for inclusion as a reserve currency by the International Monetary Fund, burning through more than $108 billion of China’s reserves to defend its value in the face of capital outflow pressures against the yuan.

Market forces are exerting an impact on the Chinese economy that the Party has no way to control.

Yet the yuan is pegged to the U.S. dollar, supported by the Federal Reserve, which has the opposite agenda—of tightening monetary policy. So as the dollar strengthened over the last few months, the yuan—through its peg—also rose relative to other currencies. At the end of December, Beijing announced that it should maintain stability versus a basket of currencies, instead of trying to keep up against the dollar.

Compounding the issue is the fall in China’s Caixin/Markit Purchasing Managers’ Index released on Jan. 5, showing that growth in the all-important services sector had declined to its slowest pace in 17 months. The PMI reading, along with expectations of possible selling by corporate insiders as the Jan. 8 deadline approached for an end to the share sale ban enacted last year, lowered investor appetite.

The currency movement, coupled with this weak flash of economic indicators, spooked investors. The move was interpreted by many as a last-ditch effort to prop up a weakening economy that many suspected but few officially acknowledged.

Last year, Beijing attempted to solve some of its debt problems by engineering a stock market rally. After that effort largely failed, regulators turned to lowering interest rates and keeping the currency weak to prop up companies.

Adding fuel to the fire was Beijing’s miscalculation of stock market circuit-breaker thresholds. Last Monday, Jan. 4, regulators unveiled a new circuit-breaker mechanism, which would shut down the market if it fell by 7 percent.

China has seemingly pulled a rabbit out of its hat each year, defying analyst expectations of a hard landing by applying incremental stimulus.

That exact scenario occurred on its first day in action—Monday—as well as on Thursday, Jan. 7, after only a half hour of trading. Regulators blamed the new circuit breakers for worsening last week’s stock market selling spree, and instead suspended the circuit-breaker system after only four days in operation.

Market circuit breakers in the United States, a far more mature market, would stop trading after a decline of 20 percent.

In short, last week’s equities selloff by investors was a vote of no confidence in Beijing’s ability to manage its economy, currency, and markets.

The 2016 Chinese market gyrations has everything to do with the underlying economy, and its consequences could be exponentially more dangerous given the precarious states of other markets including emerging markets/high-yield debt, natural resources, and commodities.

Some mainstream analysts are starting to imagine life with a sharp China slowdown.

“Lower-for-longer … could be the defining mantra of this decade for the major advanced economies if a Chinese shock scenario materializes.”
— Bill Warlick, Fitch

Fitch Ratings says growths of 2.3 percent during 2016–2018—a scenario that some analysts, including UK’s Lombard Street Research, believe is more accurate than official statistics—would herald “significant knock-on effects for emerging markets and global corporates.” While Fitch states that this scenario is hypothetical and doesn’t reflect its current expectations, such studies were nevertheless confined solely to economic “doomsayers” not long ago.

“Lower-for-longer in terms of growth, interest rates and commodity prices, could be the defining mantra of this decade for the major advanced economies if a Chinese shock scenario materializes,” Bill Warlick, Fitch’s Senior Director of Macro Credit Research, said in its study.

“Economic growth is slowing anyway, but the chances that the right measures are taken in time to control this process have decreased,” said Citigroup Chief Economist Willem Buiter in an interview with Dutch financial media FD.

Buiter is a China bear and has little confidence in the ability of Beijing to manage the crisis. “The people who have to support the transition process are Party leaders, few are economists. And their economic advisers actually have little to no say. The Minister of Finance does not have a policy that performs. The same applies to the central bank,” he added.

“We will therefore see a greater impact on the world economy than what most people in their expectations for 2016 took into it.”

Whether China will welcome constructive—but extremely painful—reform is doubtful given the Party’s history. So far, changes have been minimal and involve propping up unviable state-owned enterprises instead of shutting them down, which will worsen, not fix, the fundamental issues.

The reason invariably lies in politics. The Party wants to maintain its tight grip on power, and while true reform will ensure a more stable future at the expense of the present, that also means it would jeopardize the Party’s authority. Deep, painful cuts will need to be made—to jobs, SOEs, and policies—in order to shift the economic growth mandate from the state to the consumer and the private sector, including small businesses.

But China’s inability to control market forces may soon force its hand.

“China’s policymakers are now confronting a tsunami of volatility the likes of which they’ve never seen and as a result confronting the reality that they can’t continue pouring state assets and resources to suppress every fire,” Georgetown Professor Arthur Dong told Forbes last week.

Time is running out, as some private enterprises are already beginning to collapse. In the southern commercial hub of Shenzhen, a string of smaller firms closed their doors in recent months, according to a Wall Street Journal report. On Dec. 28, 2015, hundreds of workers organized protests outside Shenzhen’s city government offices seeking compensation for unpaid wages.

Today, Beijing’s only saving grace is that Western companies are still pouring billions of foreign direct investment into China each year, thinking they can profit from China’s growth and consumer sector.

When that confidence evaporates—and it’s already wavering—the day of reckoning will not be far off.