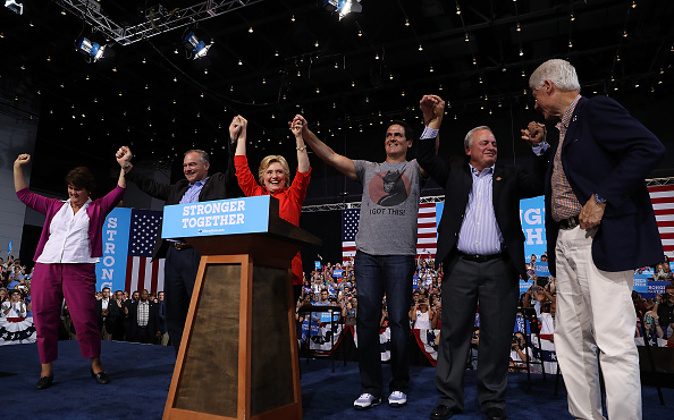 During an appearance at a campaign rally in Pittsburgh on July 30, Mark Cuban made clear his political preference: in November, he will be voting for Democrat Hillary Clinton.

In the past, Cuban had showed support for both candidates, and had even praised Republican Donald Trump for his honesty. “He says what’s on his mind. He gives honest answers rather than prepared answers,” said Cuban last year.

However, Cuban, born in Pittsburgh, had a different description for Trumo on Saturday. “Leadership is not yelling and screaming and intimidating,” Cuban said at the rally.

He made the remark after opening his talk by saying “hello” to Trump in Russian, mocking the appearance of Trump’s praising of Russia’s Vladimir Putin.

He also criticized Trump’s businesses endeavors, saying that real entrepreneurs take risks rather than depending on others.

“You don’t ask Daddy for a small loan of a million dollars,” Cuban said. “That’s not what entrepreneurs do.”

Additionally, he said that Americans should not only vote for Clinton, but urged others to do the same.

“You have to convince all your friends — you have to tell everybody you know that this is one of the most important decisions they’ll make for this country,” Cuban added. “This country needs the leadership of Tim Kaine and Hillary Clinton.”

Last month, Cuban said on FOX Business that “there’s a good chance I’ll vote for Donald Trump” if Clinton chooses Sen. Elizabeth Warren as her running mate. In May, he expressed he would run for vice president for either Clinton or Trump.

“I don’t care what his actual positions are, I don’t care if he says the wrong thing,” he added. “He says what’s on his mind. He gives honest answers rather than prepared answers. This is more important than anything any candidate has done in years.”

A Clinton aide said that Cuban had been communicating with the Clintons about possible endorsement, according to ABC News. He ultimately confirmed his support in a telephone call on Thursday.