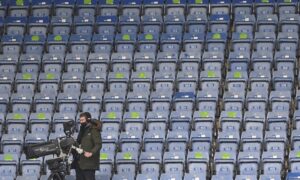 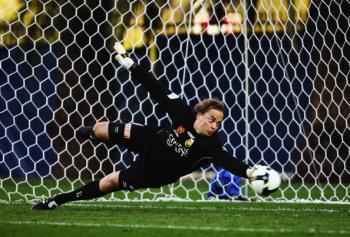 Once upon a time arguably the best goalkeeper in the English Premier Leagueâ�¦Mark Bosnich returned to the pitch for the Central Coast Mariners last weekend. (Brendon Thorne/Getty Images)
Soccer

The Central Coast Mariners have over three successful seasons proved to be the fairytale club of the Hyundai A-League and Sunday July 27 saw another “once upon a time” scenario played out on their fabled NSW home pitch.

If ever there was a prodigal son of Australian football in need of a little magic and home coming redemption, it was former Socceroo goalkeeper Mark Bosnich.

At 36 years of age, a man who had so many times strode onto Old Trafford as the first choice stopper for Manchester United had not played a professional match for over six years.

Drug and personal problems much publicised by the British tabloids had largely seen to that.

So in steps the Central Coast – the widely regarded family club of Australia’s domestic national soccer competition have rapidly garnered a fan base and victory tally far beyond general expectations – with an offer for Bosnich to trial for the club starting with a stern test in goals against rivals Sydney FC last Sunday July 27.

It may have been only a second round pre-season clash, but more than seven thousand spectators turned up on a stormy Gosford afternoon to see Bosnich standing in the spotlight.

By the time Sydney FC had been awarded a penalty deep into the second half, the home side were 3–0 up and the star attraction had already more than lived up to his top billing with a series of stunning saves.

But a clean sheet clearly means something special to keepers everywhere.

In this, Bosnich proved no exception as he dived to successfully block the penalty shot taken by former Socceroo Steve Corica and deny Sydney their consolation goal.

Meanwhile, the other Pre-Season Cup round two clashes held last weekend saw Queensland Roar and Wellington Phoenix produce a 1–1 draw on the Sunshine Coast, Newcastle Jets and Adelaide United play out a scoreless draw in Cessnock and Melbourne Victory secure a 1–0 away victory against Perth Glory.

In other landmark news, Football Federation Australia announced on Monday that an eight-team national women’s league will kick-off at the end of October.

The Westfield W-League will comprise teams from each of the seven Australian Hyundai A-League clubs as well as Canberra.

While broadcast rights are still under discussion, the Federal Government has already committed funds towards the cost of establishing a televised national women’s league.