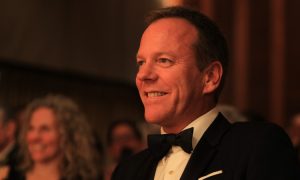 FLUSHING, New York City—John Caldwell, a stocky twenty-eight-year old U.S. Marine., could hardly believe his ears when he first heard that while he was risking his life for his country in Iraq, his mom was in danger in his hometown of Flushing, New York.

Caldwell is now home to check on his mom after she was attacked and her life was threatened by henchmen supportive of the Chinese Communist Party (CCP). Chen was attacked because of her belief in the meditation practice Falun Gong.

Caldwell knew before his mom was attacked last month that Falun Gong has been brutally persecuted by the Chinese government in China since 1999. What he did not know was that his mother, as a Falun Gong practitioner, is also a target of threats and physical assault by the CCP in his own hometown.

During Independence Day weekend, in an interview with Caldwell, he talked about his experiences serving in Iraq and how he values the freedoms first given voice in the Declaration of Independence. Caldwell also talked about why he signed up for the military, and his feelings about the events stirred up by the CCP in Flushing.

Caldwell was aware that his mom was working in support of the Service Center for Quitting the Chinese Communist Party booth in Flushing. He also knew that for the past four years that there had never been any trouble. When he first heard on June 2 that Falun Gong practitioners, including his mother, had been attacked and threatened by the CCP mobs in Flushing, he was stunned. He was in California at the time just completing one month of desert training prior to his deployment to Iraq.

Caldwell's mother told him that there were problems in Flushing and that she had been attacked and that her life had been threatened by mobs she believed were hired by the CCP. Caldwell returned home to Flushing within five days of the phone call.

Chen took her son to the exact spot in front of the Flushing branch of the New York Public Library where she was attacked. Caldwell was disturbed that the attack had happened in the United States, almost literally in his own backyard.

"When that time comes justice will be served," said Caldwell, reflecting on the attack.

"I think that he [Peng] is afraid of the good that Falun Gong will bring to China … He sits behind his desk and has other people do his dirty work."

Caldwell and his younger brother Jason joined the military because they felt that it was their calling, he said. They also felt that in the military that they would be able to bring some good to the world by helping others gain freedoms like those enjoyed in the United States. Caldwell joined the Marines right after the Sept. 11 terrorist attacks. Caldwell believes that Falun Gong and its values of truthfulness, compassion, and tolerance can only help China to emerge from the nightmare that communism has wrought on its people during the past 60 years.

He also believes that the CCP's acts of terrorism against his mother and other Falun Gong practitioners here in the United States has further implications, noting that it should be seen as a warning for all Americans.

But Caldwell added that he feels the outcome will be a triumph for Falun Gong.

"I believe that Falun Gong will have the final say in this matter," he said. "These acts of state sponsored terrorism by the CCP will not serve to destroy Falun Gong, it will only make Falun Gong work harder to do positive things to improve this world."