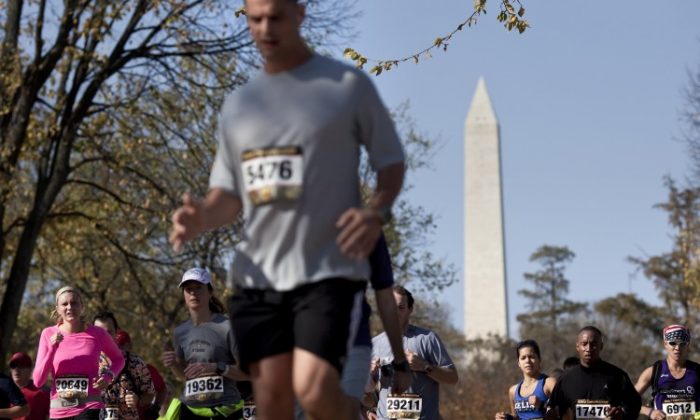 Runners travel across the National Mall near the Washington Monument during the Marine Corps Marathon in 2010 in Washington, DC. (Brendan Smialowski/Getty Images)
US

Registration for the 38th Marine Corps Marathon was filled out in just over two hours. The race has a field of around 30,000, according to the Runner’s World website.

“The People’s Marathon,” as it is called, is the largest marathon in the world to not offer prize money, taking place in October in Washington D.C. and Arlington, Virginia.

The Facebook page for the marathon’s organizers got hundreds of angry posts due to technical errors on the registration website.

“Finally got myself and my buddy registered after over an hour of trying!” reads a post from one user.

WUSA-9 TV reported this week that it went on despite the recent fatal shootings at the nearby Quantico Marine base.

“When I heard about it my heart sank. The military brotherhood is strong and it doesn’t matter which branch but it hurts even more when it’s your own branch, the Marine Corps,” Marine Corporal Aaron Thomas said.

But he added, “It made me pray a little harder to run not just for myself but for them.”