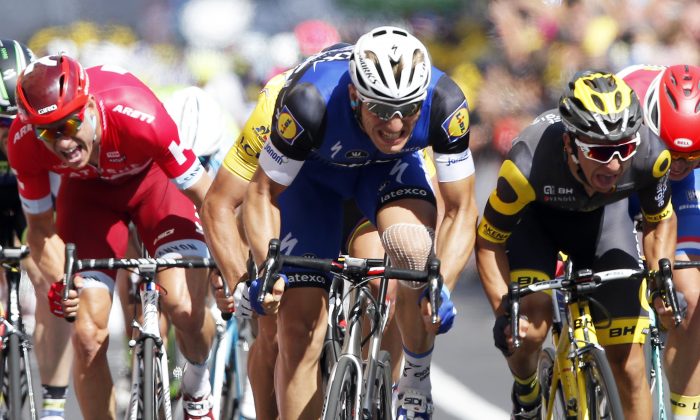 Stage Four of the 2016 Tour de France ended with another uphill sprint, half as long but even steeper than the one ending Stage Three the day before.

Lotto-Soudal set things up well for Greipel but ran out of firepower just under the One-Km banner. Katusha brought Alexander Kristoff to the front, passing the Lotto-Soudal train, and Kristoff was the first to start his sprint, with Greipel on his shoulder, but the big German faded.

Marcel Kittel came up on Kristoff’s left and passed him. Peter Sagan charged after Kittel but ran out of steam; then Bryan Coquard of Direct Energie charged past Sagan and caught Kittel.

Coquard and Kittel ran side by side—and elbow to shoulder, as the pair got a bit physical—through the final few dozen meters, crossing the line too close together for the winner to be called.

It took two analysis of two different finish-line photos to establish that Etixx-Quickstep’s Marcel Kittel won his ninth Tour de France stage by about a centimeter, with Bryan Coquard and Peter Sagan filling out the podium. Sagan keeps the yellow.

Kittle won four Tour stages in 2013 and 2014 but didn’t make the team for the next two years. He fought his way back onto the Tour squad and proved his worth in Stage Four.

“I am very emotional,” Kittel told NBCSports. “This feels like my first stage win again. My team was fighting so hard for this win.

The day started with a four-rider breakaway, which didn’t form until 45 minutes into the stage. Oliver Naesen (IAM Cycling,) Alexis Gougerard (AG2R-La Mondiale,) Markel Irizar (Trek-Segafredo,) and Andreas Schillinger (Bora-Argon18) stayed away until the final 40 km of the nearly 240-km stage, when Gougerard dropped away.

The remaining three stayed out front until four km from the finish, when the sprinters’ teams decided it was time to start racing for real.

Despite the long stage and the high pace (much quicker than the day before) the big teams were all flying; no team could seize control of the race. A series of gentle S-bends studded with road furniture compressed the field three km from the finish; it was miraculous that no one crashed, but this only amplified the confusion and scattered teammates.

It took 2000 meters for Lotto-Soudal to fight its way to the front with three riders ahead of their sprinter, André Greipel. Tinkoff’s Peter Sagan latched onto Greipel’s wheel. Dimension Data got leadout leader Mark Renshaw to the front coming under the one-kilometer banner but Cavendish was detached, 20 wheels back.

Lotto-Soudal ran out of firepower a few hundred meters later; Katusha had a rider drag Alexander Kristoff to the front of the field, with André Greipel clinging to the Norwegian’s sprinter’s wheel. Etixx had one rider pulling Kittel along in their wake.

At this point the road was tilting up at five percent, sapping the strength of the riders.

Kristoff took off with the Etixx rider next to him, sheltering Kittel; that might have been Kittel’s winning advantage. Kittel had an extra couple of dozen meters out of the wind, while Bryan Coquard had to charge hard to catch Sagan’s wheel, and then had to charge even harder to catch Kittel.

Coquard must be heartbroken. The Direct Energie rider has now matched the pace of the strongest sprinters in the world and has twice lost by less than an inch.

Stage Five might be the first where the General Classification contenders challenge each other.

The 216-km route contains six categorized climbs: a Four, two Threes and a pair of Cat Twos in the final 30 kms, with another Cat Three three km from the line, with a short descent and another 500-meter climb to the finish.

The route shouldn’t present any problems for the GC contenders … unless one of them should happen to have a bad day (or in Alberto Contador’s case, a tough night trying to sleep on a bruised shoulder.)

No real aggression should be expected from the GC riders, most of whom are clustered together 18 seconds back—unless one of them fails to respond to a short probing attack, in which case a scuffle could follow.

It is not impossible that someone like Alberto Contador (-1:06) or Richie Porte (-2:03) might launch a desperation bid to claw back a few seconds of time, but also to regain a little lost morale.

A sneak attack in the final few hundred meters to capture a time bonus could happen, because the riders in the top 20 places simply might not care—even if he won a ten-second bonus and an ten-second lead, Alberto Contador would still be 45 seconds back, and Porte, a minute and forty-five..

More than likely a breakaway will form, get caught on one of the cat 2 hills, and then either a pursuit group or a fresh attack will get away and race for the stage win, while the GC riders will be content to mark each other up the climbs.