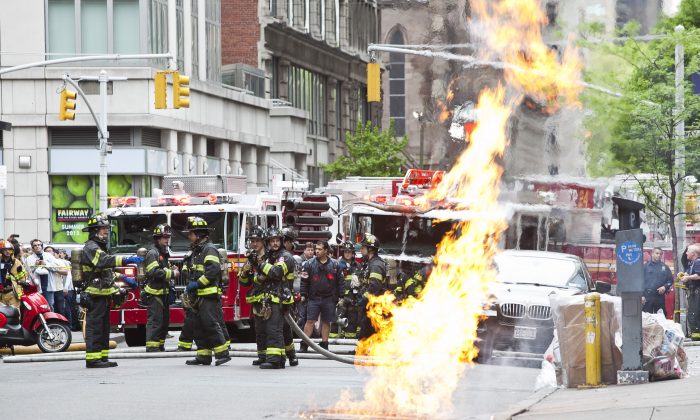 A fire on the NW corner of 6th Avenue and 25th St., next to Two Bros Pizza in Midtown Manhattan, was raging out of a manhole between 5:00 p.m. and 6:00 p.m. (Samira Bouaou/The Epoch Times)
New York

The superintendent of a nearby building said it was an electrical fire. As the flames whipped about 10 feet high, approximately 30 firefighters and police on the scene waited for Con Edison to arrive and cut power to the transformer.

When Con Edison arrived at approximately 5:50 p.m. to turn the power off, one FDNY firefighter said, “this is the guy we have been waiting for.”

At about 5:55 p.m., firefighters turned on the hose and sprayed water into the manhole, causing massive amounts of steam rising to a height of about three stories.

“Thank you for saving us,” said one bystander to a firefighter.

“I didn’t save anyone. I just put on the yellow tape,” responded the firefighter.