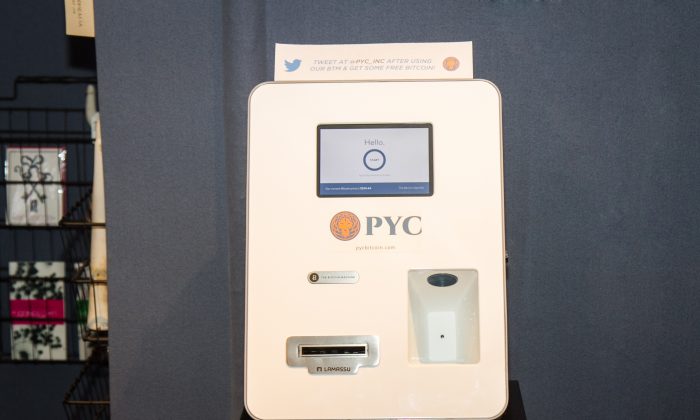 The first and currently the only Bitcoin ATM machine in New York City inside the store Flat 128 in the West Village, Manhattan on Aug. 21, 2014. (Benjamin Chasteen/Epoch Times)
New York

Manhattan Gets Its First Bitcoin ATM

The BTM, operated by PYC Bitcoin, is marketed as a device that lets users exchange cash for the popular cryptocurrency in a quick, accessible manner.

The usual means of purchasing Bitcoin can be too cumbersome for new users, says PYC Bitcoin’s Matt Russell. Registering at an online exchange requires linking your bank account and providing personal information, and the process can take a few days.

“The price might change, their impetus to buy Bitcoin might subside by then,” said Russell. “This little thing changes that; you can walk into Flat 128, there are human beings that run this, and the whole thing takes 30 seconds.”

To use the BTM, the customer needs to have a smartphone and download a Bitcoin app. The machine receives cash, scans the user’s QR code on their app, and sends the sum to the user’s digital wallet in Bitcoins.

Elizabeth DuBois, the owner of Flat 128, chose to have the BTM at her store after a few casual conversations about Bitcoin with Russell, a decade-long friend.

“A lot of people have come in to check it out, it’s gotten a lot of press coverage,” said DuBois, who is offering a 10 percent discount for most of the items at her store when paid in Bitcoin.

Russell says that merchants who offer a discount can recoup on their losses by saving on credit card fees and bring in new customers who wouldn’t usually shop at their stores.

The BTM at Flat 128 is manufactured by Lamassu, which sells them for $6,500 each, and accepts currencies from over 200 countries.

PYC Bitcoin would not disclose the percentage fee for using the BTM, which are subject to change on “a variable basis to regulate demand.”

Eli Dourado, a research fellow at George Mason University and Bitcoin enthusiast, says he is “somewhat baffled by the Bitcoin ATM phenomenon.”

“They’re like cellular payphones—possible, but then again the whole point of cell phones is that everyone can have their own,” Dourado wrote in an email interview. “Very few people would use a cash ATM on the street if they could load up their wallets with cash from their bank accounts at home any time they wanted.”

While acknowledging that BTMs might offer “modest privacy advantage over online exchanges” granted that no security cameras watch the machines, Dourado thinks that “for most users, convenience trumps privacy.”

The BTM’s manufacturer says that the device is all about convenience—for new users.

“The form factor of an ATM is familiar and ours is exceptionally easy and friendly to use,” said Lamassu’s co-founder Zack Harvey. “[The BTM] allows you to invest as little as $1 and get the equivalent amount in Bitcoin within seconds. It simply answers the question of “but how do I get Bitcoin?”

Dourado admits that BTMs can clear a mental roadblock for Bitcoin neophytes, a way of popularizing the arcane software to the general public.

“They provide something physical for potential new users to see and touch—they provide evidence that Bitcoin is real, which can sometimes be hard to believe given the abstract nature of the blockchain,” he said.

As a marketing device, the BTM appears to have been a success thus far. DuBois said that many people came to her store Thursday to look at the device.

“They’re surprised by how sleek it is, it’s not clumsy at all,” she said. “I was half-expecting a monstrosity, but it’s super-sleek and cute.”