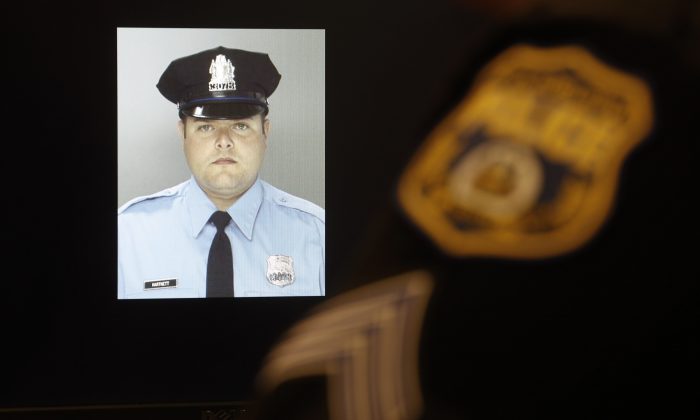 An officer sits next to a displayed image of Officer Jessie Hartnett ahead of a news conference Friday, Jan. 8, 2016, in Philadelphia. (AP Photo/Matt Rourke)
Crime and Incidents

The suspect arrested after allegedly trying to “execute” a Philadelphia police officer has given a full confession, police said.

The suspect has been identified as Edward Archer, 30.

Sources told CBS that the wounded police officer, Jess Hartnett, was in his vehicle in West Philadelphia around 11:30 p.m. Thursday night when Archer walked toward him and appeared to be about to ask for directions when he pulled a 9 mm and opened up with 13 shots.

Harnett was able to fire back and hit Archer at least three times.

Philadelphia police commissioner Richard Ross said at a press conference that Archer gave a full confession, admitting he committed the crime in the name of Islam.

The confession was recorded and written down. Archer pledged allegiance to terror group ISIS.

“When you look at the video, this is one of the scariest things I’ve ever seen,” Commissioner Ross said.

A picture of the suspect hasn’t been released.

Harnett is in stable condition, the department said.

Jim Kenney, who is in his first week as mayor of the nation’s fifth-largest city, said in a statement that, “There are just too many guns on the streets and I think our national government needs to do something about that.”