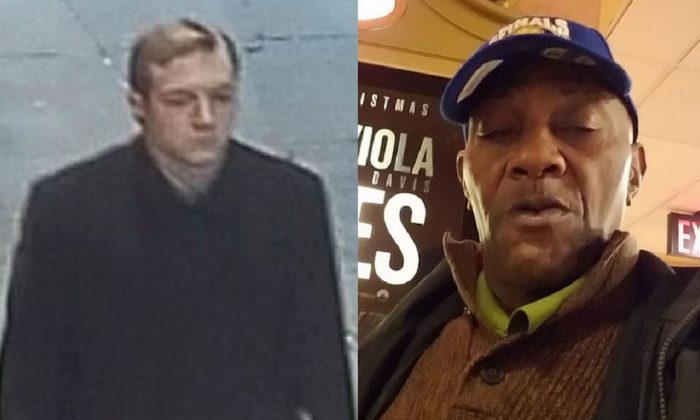 James Harris Jackson in a still from surveillance footage, and his victim Timothy Caughman, 66, in a file photo. (NYPD)
Crime and Incidents

Man Who Killed Another With Sword Sentenced to Life Without Parole

A Maryland man who was convicted of killing another man in New York with a sword was sentenced to life in prison without the possibility of parole.

James Harris Jackson confessed to the killing, pleading guilty last month to first-degree murder and second-degree murder as an act of terrorism. In New York Supreme Court on Feb. 13, he apologized for killing Timothy Caughman, 66, with a Roman-style sword.

“I just wanted to apologize to everyone who has been affected by this horrible and unnecessary tragedy,” Jackson told Manhattan Supreme Court Justice Laura Ward, reported amNY. “It never should have happened, and if I could do it all over again it never would happen, for sure.”

The murder took place in Manhattan in March 2017.

Manhattan District Attorney Cy Vance attended the sentencing and spoke to the judge, quoting excerpts from a manifesto that Jackson penned that outlined his intentions of triggering a worldwide race war.

“The racial World War starts today,” Jackson wrote, according to Vance, reported the New York Post. “This political terrorist attack is a formal declaration of global total war on the Negro races. They must be exterminated as quickly as possible.”

Jackson also said other nations should help with the war because it was a “complex logistical task.” The manifesto has not been released publicly.

Vance said Jackson’s conviction was the first in the state of first-degree murder as an act of terrorism.

In the courtroom, Richard Peek, a cousin of Caughman, also read aloud a letter written by his niece.

“We’ll never be able to share another family moment with Timothy, we’ll never get to say goodbye to our loved one, we’ll never know how much he truly suffered or how alone he felt in his last moments,” Peek read. “That is our life sentence. We get no parole either.”

Jackson’s lawyer told reporters after the sentencing that he served with honor alongside and under black people in the Army but a series of setbacks in his life broke him.

“He simply could not find direction,” said lawyer Fred Sosinsky, reported amNY. “It’s that type of person who is most susceptible to hate and terror.”

A white supremacist from Baltimore killed a black New Yorker with designs on sparking a race war. He was sentenced today to life without parole. https://t.co/FCIMVTVilv

A white supremacist who killed a black man with a sword as part of an attack that authorities said was intended to incite a race war has been sentenced to life in prison without parole. https://t.co/N4Ajtc5cxL

Jackson served in the Army from 2009 to 2012 and was deployed to Afghanistan for about a year.

The veteran took a bus from Baltimore to New York City and eventually picked out Caughman, who was collecting bottles, stabbing him in the back and chest and dealing him fatal wounds.

After the killing, Jackson went to the bathroom of a nearby restaurant and washed off the blood.

Investigators told the Baltimore Sun they believe Jackson was thinking about carrying out other attacks but noticed his photograph in media reports and surrendered. He told investigators where they could find the sword.