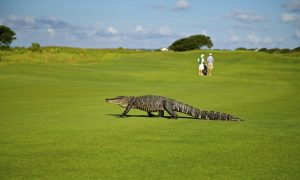 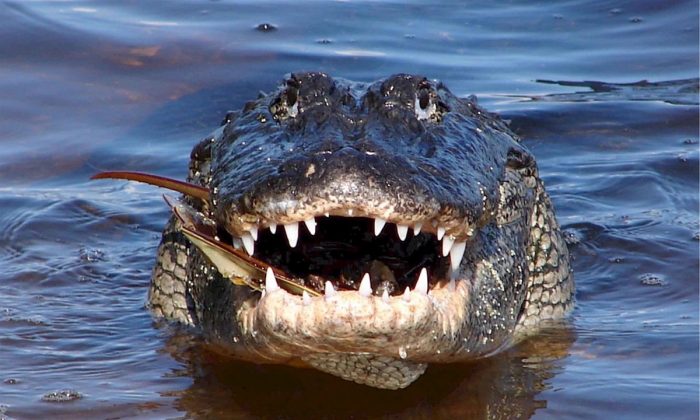 Stock image of an alligator. (Akeeze/Pixabay)
US News

A man on vacation in Florida was in for a big surprise when he came back to his rented home and found an alligator chilling in the pool on an alligator raft on May 19.

David Jacobs of Georgia had rented a home in Southwest Miami-Dade and first found an alligator in a lake behind the home, reported ClickOrlando.com.

He was in the town to attend a wedding and said the alligator was actually lured by the family’s small dog.

When the family came back home on Sunday, they were amazed to find the alligator chilling in the pool on a green alligator raft.

Jacobs reported it to the owner of the house who in turn called a wildlife management company.

There has been an increase in reports of close encounters with alligators in Florida and experts said it’s because summers speed up their metabolism and make them hungry.

“They have to find some food so that’s when we’ll find them on sidewalks and people’s pools,” Brian Norris of Florida Fish and Wildlife told Fox 4 in Fort Myers.

“They’re really just out there browsing around,” he said.

Alligators also move around when they are looking for mates during the mating season. North Port Police had to deal with one hiding under a man’s car in a parking lot on April 12.

Norris said that alligators are wary of humans but children and pets should be protected from them.

“If you are near water, just mindful of that there could be some sunning themselves on the bank, if you have pets, be mindful especially near water,” Norris said.

The American alligator, one of the Sunshine State’s most ubiquitous reptiles, wasn’t always so. At one point, they were hunted to near extinction and placed on the endangered species list and then removed in 1987.

Since then, scientists said gator attacks have been on the rise in Florida.

Humans may be to blame.

According to Inside Science, a science news publication, gator bites in Florida “have been on the rise, increasing from an average of just one every three years between 1988 and 1999 to about seven per year between 2000 and 2016.”

Statistics from the Florida Fish and Wildlife Conservation Commission differ, but still, show an increase in the number of alligator bites suffered by humans since gators came off the endangered species list. Bites have increased from about six per year from 1971 through 1986 to about 10 per year from 1987 through 2017, according to FWC data.

As population and development have increased in Florida, scientists said, so too have alligator attacks.

University of North Florida researchers, studying the interaction between humans and alligators, presented their findings to the Ecological Society of America earlier this month. Of the many factors they studied, including temperature and rain, they found that humans were the only logical thing to blame for conflicts.

“Using simple pairwise linear regression, we found that only human population size was a reliable predictor of alligator attack rates in Florida during the period 1988-2016,” Morgan Golden-Ebanks and Adam E. Rosenblatt wrote in the study. “As a result, management of human-alligator conflict should focus on limiting human-alligator interactions and preventing the further development of areas used by alligators.”