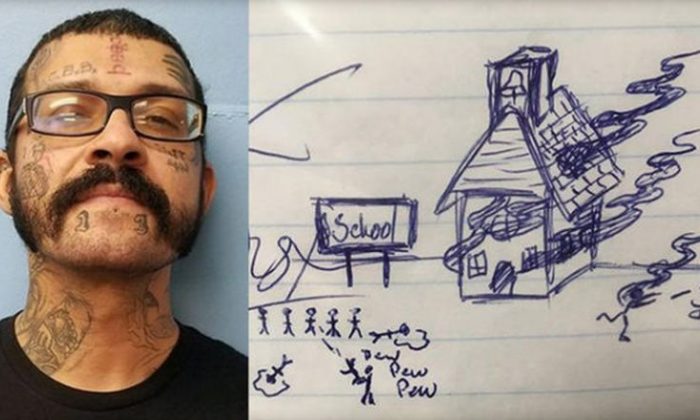 A Florida man was arrested last week for drawing what was believed to be threatening images on an elementary school student's homework. (Gulf County Sheriff's Office)
US News

A 33-year-old man in Florida was arrested and charged after staff contacted a school resource officer about a drawing that showed a school on fire and people being shot.

Robert Paul Alexander Edwards, of Mexico Beach, was arrested Friday for the picture, which was found on a student’s homework assignment, the Gulf County Sheriff’s Office said in a news release.

They found that Edwards drew the picture, which also includes the words, “Pew, Pew, Pew” next to an individual with a gun. Another person can be seen saying, “AHHH! It burns!”

There also appears to be a pool of blood, according to the sheriff’s office.

Edwards faces charges of a written threat to kill or inflict bodily harm on others.

“Our country has been affected one too many times with horrific school tragedies. We take matters like this very seriously,” Gulf County Sheriff Mike Harrison said in the release.

Harrison, however, said that he doesn’t think that Edwards had a plan to carry out the threat.

It’s not clear how Edwards knew the student or how he was able to draw a picture on the student’s homework.