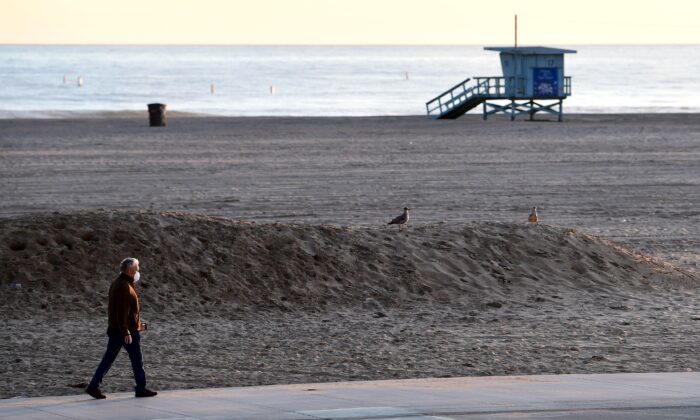 A man wears a mask while walking on a quiet afternoon at Santa Monica Beach, Calif., on April 10, 2020. (Frederic J. Brown/AFP via Getty Images)
Southern California

MALIBU, Calif.—A 55-year-old man was in custody July 10 on suspicion of committing numerous acts of vandalism in Malibu while wielding a pickaxe.

Thomas Aaron Brothers was identified as a suspect in numerous incidents of vandalism in the Malibu area over a three-day period, which included damage to numerous vehicles, residential front doors, and cameras throughout the city, the Los Angeles County Sheriff’s Department’s Malibu/Lost Hills station reported.

Deputies followed a tip on Friday regarding Brothers’ whereabouts and saw him exiting a Metropolitan Transportation Authority bus at Ocean and Colorado boulevards in Santa Monica. Along with Santa Monica Police Department officers, they canvassed the area but Brothers was not initially located.

Several hours later, deputies returned to Santa Monica to search for him and located him near the California Incline. He fled that location and was later found in a Santa Monica Beach restroom at about 11:45 p.m. Friday.

Brothers was taken into custody without incident and booked at the sheriff’s Malibu/Lost Hills station, according to the sheriff’s Inmate Information Center. He was being held in lieu of $20,000 bail.