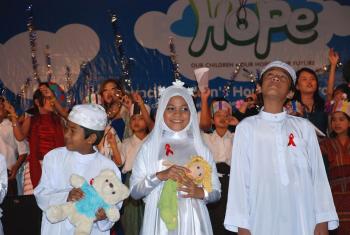 James Chow
View profile
Follow
biggersmaller
Print
KUALA LUMPUR, Malaysia—Seven selected orphanage homes in Malaysia are getting a helping hand from the Malaysian Bar Council this year, in conjunction with the celebration of the 61st International Human Rights Day.

Each year, the Bar Council’s Human Rights Committee (BCHRC) hosts a themed event to celebrate International Human Rights Day. This year, the committee put on a fundraiser dinner for orphans to honor the theme, the promotion of the economic, social, and cultural rights of children.

“We have chosen to highlight the plight of the children living in these seven homes because not enough is being done to alleviate the situation of marginalized children in Malaysia,” said Mr. Ragunath Kesaven, president of Malaysian Bar. Kesaven said another reason the theme was chosen because 2009 marks the 20th anniversary of the Convention of the Rights of the Child.

The “Our Children, Our Hope, Our Future” dinner held on Dec. 10, was a chance for the children and their benefactors to come together—a rare treat for these disadvantaged children to be able to come to the 5-star Sunway Resort Hotel in Petaling Jaya, just outside the capital, Kuala Lumpur.

Roger Chan on the organizing committee said he expected when all the accounting was done, the event would exceed expectations of raising RM 70,000 ($20,500). In addition to paying a fee per plate, attendees had the chance to bid on the children’s artwork, with prices reaching as high as RM 650 ($190).

Entertainment for the evening was also provided by the children themselves. Children from the Gurpuri Foundation, a home for Sikh children, did a Bollywood dance number. Members of Rumah Solehah, a home that shelters 16 orphans or abandoned children who are living with HIV/AIDS, wore pure white shirts with red ribbons as they sang a selection of religious songs, all receiving enthusiastic applause from the audience.

“The way we gain meaning for our lives is to devote ourselves to loving others, to our community around us, and to create something that gives us purpose and meaning,” said the chairperson of the organizing committee, Siti Kasim, as she thanked the sponsors and contributors.

She also praised her team members who made the fundraising dinner possible. “The team has shown a huge amount of compassion, understanding, leadership, and vision in their ongoing effort.”

The night ended with a grand finale as the organizing committee took the stage along side the young performers for a rousing rendition of “We are the World.” Andrew Khoo, co-chair of BCHRC, urged those present to continue the efforts to help the underprivileged children and neighborhoods in needs even after the dinner.