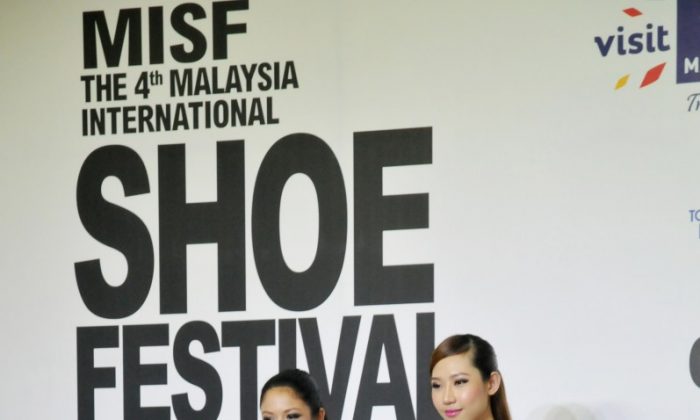 “There’s no way to get a pair of three-inch high heel shoes for $20 in other countries,” President of Malaysian Footwear Manufacturers Association Tony Ting said at the kickoff event on March 28. A three-day trade show followed, with the festival wrapping up on March 31.

To illustrate the potential footwear tourism has for the nation, Ting gave an example of a tourist who waited for a Vincci shoes shop to open in Kuala Lumpur City Center shopping district. The tourist bought 30 pairs of shoes before boarding a flight home.

Malaysia’s Ministry of Tourism has promoted the festival and the industry as part of developing the country as a luxury destination. Shoe sales account for 17 percent of the money spent by tourists in Malaysia.

Malaysia ranks 19th in the world for shoe exports and is home to 800–1,000 shoe manufacturers.

The festival showcased local talent, but also featured designers from all over the world, with a total 150 brands on display. Featured brands included Malaysia’s Snowfly and Larrie; Italy’s Fiorucci and Geox; Denmark’s Ecco; America’s Timberland; and many more.

“You can say it’s a tribute to our rich artistic culture,” Choo told Malaysian publication, The Star. “We also need to acknowledge the people and the skills involved in producing the fabrics that go into my shoes. The same thing applies to the art of shoe-making—it is very much part of our heritage and it will soon be gone if not properly preserved,” Choo said.

The festival encourages up-and-coming local talent with the Young Designer Pavilion, the Young Designer Showcase, and the Malaysia footwear design competition. Students from 25 design schools participated in the competition. The winners were announced on opening day and will go on to participate in the International Footwear Competition in Guangzhou, China, competing against designers from 11 other countries.

While the country celebrated footwear tourism, Malaysia’s Minister of Tourism Dato Sri Ng Yen Yen, recalled the recent hit tourism has taken in light of the insurgency by the ethnic Suluk people. Tourism has decreased by about 35 percent in the regions most affected, and even in the capital of Sabah, a Suluk-majority Malaysian state which is 250 miles from the towns where the insurgency is playing out.