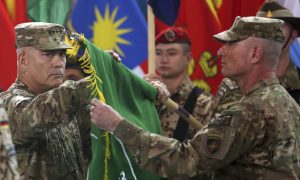 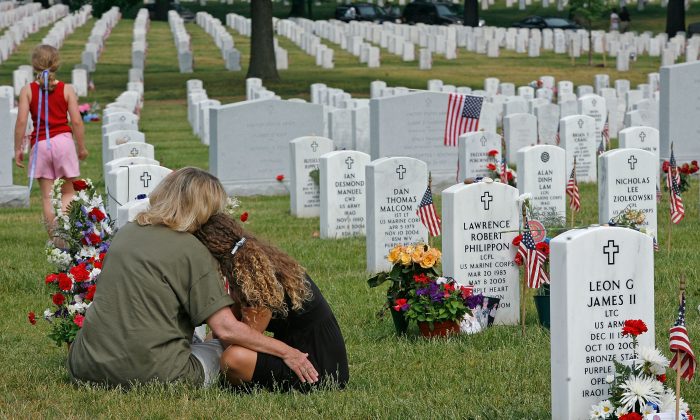 Crystal Lewis (L) and her daughter Morgan Lewis sit at the gravesite of Morgan's high school sweetheart, U.S. Marine Nicholas Cain Kirven, who was killed in Afghanistan in 2005, on Memorial Day at section 60 at Arlington National Cemetery May 28, 2007, in Arlington, Virginia. (Mark Wilson/Getty Images)
US

With his wife and child close at hand, Army Maj. Chad Wriglesworth battled skin cancer for more than a year before dying at age 37.

“It was long and painful and awful,” said Aimee Wriglesworth, who believes the cancer resulted from exposure to toxic fumes in Iraq. Yet the 28-year-old widow from Bristow, Virginia, seized a chance to recount the ordeal and its aftermath to a researcher, hoping that input from her and her 6-year-old daughter might be useful to other grieving military families.

“To be able to study what we felt and what we’re going through — maybe this will help people down the line,” Wriglesworth said.

By the hundreds, other widows, widowers, parents, siblings and children are sharing accounts of their grief as part of the largest study ever of America’s military families as they go through bereavement. About 2,000 people have participated over the past three years, and one-on-one interviews will continue through February.

The federally funded project is being conducted by the Center for the Study of Traumatic Stress at the Maryland-based Uniformed Services University of the Health Sciences. The study is open to families of the more than 19,000 service members from all branches of the military who have died on active duty since the terror attacks of Sept. 11, 2001, regardless of whether the death resulted from combat, accident, illness, suicide or other causes.

“We’ve been impressed by how many people who’ve had this experience really want to let us know about it,” said the leader of the study, Dr. Stephen Cozza. “They want to talk about what happened — to provide information that will help them and people like them in the future.”

Aimee Wriglesworth is hopeful that the study will provide new insight on how best to support young families like hers.

“A lot of things that are helping us now come from Vietnam, Korea, World War II,” she said of existing assistance programs. “But now it’s a whole new world of military losses. Studying us is really important.”

About half of the participants are providing saliva samples that will be used for genetic research, aimed at determining if certain genetic makeups correlate with the duration of the grieving process and the levels of stress and depression experienced as it unfolds. Some previous research has suggested that a certain gene variation is associated with greater risk of “complicated grief,” especially in women.

Cozza said a final report isn’t expected until 2017, and he is encouraging more survivors to sign up for interviews before the cutoff date in late February.

“Our interest is understanding what these families need,” he said. “Recognizing the need will allow us to make better policy recommendations as to what sort of services would be appropriate for them.”

The questionnaires and face-to-face interviews are being handled by eight field researchers based in regions spanning the country.

Jill Harrington, the senior field researcher, said the team members are experienced in dealing with grief and well-versed in military culture.

“For the families of the fallen, whoever they talk to, they want to be able to trust,” Harrington said. “We have a highly trained group of folks who know how to listen and how to be patient.”

While bereaved military families share much in common with other grieving families, there are distinctive aspects to many military deaths. Whether in combat, or by accident or suicide, they often occur suddenly, and many of the deceased are in their 20s or 30s.

“These are young families — a lot of single parents raising kids alone,” said Harrington. “When someone dies young, there’s a loss of the future. How do you live with that loss in your life?”

Some insight on that question will be provided by the roughly 100 children, ages 6 to 18, who are participating in the study. Most are the sons or daughters of deceased service members; a few are younger siblings.

“Many of these children, when their parent died, were very young and didn’t know them well,” said Cozza. According to preliminary findings, he said, a factor helping them weather the loss was having pride in their departed parent’s military service.

The web site for the study encourages bereaved parents to let their children participate, while acknowledging that the one-on-one interviews, lasting 90 minutes to three hours, cover sensitive matters.

“The field researchers are trained to recognize when a child is upset and will periodically ask your child if he/she is okay to continue,” the web site says. “If your child becomes upset, he/she can decide to stop the interview at any time.”

Among the children taking part is Aimee Wriglesworth’s daughter, Savannah, who was 5 when her father died at home on Nov. 20, 2013. Family photos from the preceding days show Savannah cuddling up with him as he lay stricken in bed.

According to his wife, he began reporting lumps on various parts of his body starting in 2011 and was diagnosed in 2012 with Stage 4 melanoma, a deadly form of skin cancer. The military, without being more specific, ruled that the major’s death occurred in the line of duty; his wife believes the cancer was caused by his exposure to toxic fumes from open-air “burn pits” in Iraq that were used to destroy waste at U.S. bases.

Another study participant is Ryan Manion Borek, whose brother, Marine Lt. Travis Manion, was killed in combat in Iraq in 2007. Borek now heads a foundation named after her brother, which seeks to assist veterans, as well as families of fallen service members.

Borek expressed hope that the study’s findings will reflect the wide range of ways in which survivors respond to the deaths of their loved ones.

“We don’t all fit into the same box,” she said. “That’s the beauty of doing a study like this — we can begin to understand all the different ways people are dealing with their loss.”

A video produced by the research team conveys the breadth of the study, featuring brief interviews with some of the survivors who decided to participate.

They include a Marine Corps officer, Lisa Doring, whose Marine husband died in a helicopter crash near their base in Iraq; a mother whose only son, an Army private, was killed by friendly fire in Afghanistan; and a couple whose son, serving in the Coast Guard, committed suicide after what they described as sustained bullying and harassment.

Of all the active-duty deaths in the period being studied, about 13 percent were suicides. Accidents accounted for 35 percent, combat 30 percent, illness 15 percent and homicide 3 percent, according to Cozza.

One of the major partners for the study is the Arlington, Virginia-based support group known as TAPS — the Tragedy Assistance Program for Survivors. It was founded in 1994 by Bonnie Carroll two years after her husband, a brigadier general, died in an Army plane crash.

Carroll said she was heartened that the study encompassed all types of deaths, even including service members responsible for murder-suicides.

“Regardless of how the person died, at some point in their life they stepped forward to raise their right hand and say ‘I will protect this nation,'” Carroll said.