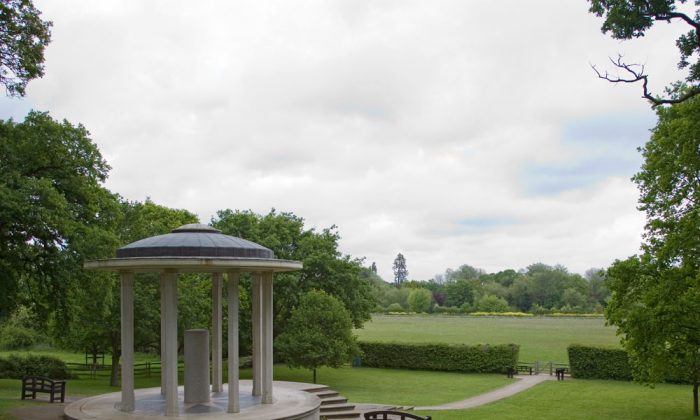 The Magna Carta Memorial at Runnymede Meadow is one of several memorials erected over the years at the site where the renowned document was signed in 1215. The Magna Carta and its companion, the Charter of the Forest, will begin a tour of four Canadian cities on June 11, 2015. (WyrdLight.com/Wikimedia Commons)
Canada

The Magna Carta, the document that set the groundwork for democracy, justice, and human rights, will come to Canada this year to mark its 800th anniversary, the government has announced.

The document and its companion, the Charter of the Forest, will be exhibited at the Canadian Museum of History in Ottawa on June 11, before going on to Winnipeg, Toronto, and Edmonton.

Created in 1215, the Magna Carta, or Great Charter, was the first document in English jurisprudence to state that the monarch was not above the law. Written in Latin, it became the basis for freedom, democracy, and rule of law in the United Kingdom and the Commonwealth, including Canada.

“When the Fathers of Confederation came together at the Québec Conference in 1864, they were unanimous the new country should remain a constitutional monarchy based on the concepts expressed in the Magna Carta: freedom, democracy and the rule of law should be the birthright of every citizen,” Shelly Glover, Minister of Canadian Heritage and Official Languages, said in a statement.

No single document has had such a profound influence on the establishment of constitutional and human rights instruments around the world.
— Former Speaker of the Senate Noel Kinsella

“This year, when we mark the 800th anniversary of the Magna Carta, we will celebrate everything that makes Canada strong, proud, and free.”

The Magna Carta came about as a way to make peace between the King of England—who was extremely unpopular—and his rebellious barons, his most senior subjects. King John was also at odds with the church at the time.

It was signed at Runnymede Meadow, near Windsor, in 1215, and although it went through many changes over the years, it was groundbreaking in that it sought to establish protections for the common man, and not just the privileged elite.

According to former Speaker of the Senate Noel Kinsella, the Magna Carta has had a powerful influence on human rights today.

“No single document has had such a profound influence on the establishment of constitutional and human rights instruments around the world,” he writes on his website.

“In addition to being a remarkable document for its day, the Magna Carta has actually come to mean more to future generations as the cornerstone of liberty and constitutional democracy.”

Kinsella noted that the document “has served as a precursor to such significant human rights instruments as the Universal Declaration of Human Rights, the European Convention for the Protection of Human Rights and Fundamental Freedoms, and the United States Constitution’s Bill of Rights.”

Lord Denning, the renowned British lawyer and judge who died in 1999, described the Magna Carta as “the greatest constitutional document of all times—the foundation of the freedom of the individual against the arbitrary authority of the despot.”

Over the years, the document was refined into four key points: nobody is above the law; all are entitled to freedom from unlawful detention (habeas corpus); all have the right to a trial by jury; and widows could not be forced into marriage and give up their property—an early first step in women’s rights.

The Magna Carta and the Charter of the Forest are being brought to Canada through the efforts of Magna Carta Canada, a non-profit charitable organization that has been granted the loan of documents for six months. They are owned by Durham Cathedral, located in Durham, England.