The Mystery of the Chinese Pyramids
0 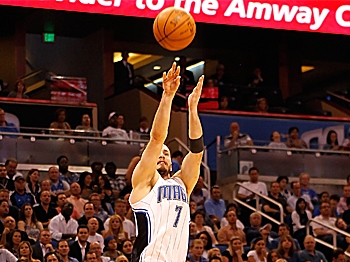 FINDING HIS MARK: J.J. Redick got his shot back in Game 5 against the Atlanta Hawks. Redick ignited the team's offensive in the first quarter with 11 points coming off the bench. (J. Meric/Getty Images)
NBA

Magic Rout Hawks to Hang on for Game 6

By Dan Pomerleau
Print
The Orlando Magic put a spell on the Atlanta Hawks in Game 5 of their Eastern Conference first round matchup on Tuesday, routing the Hawks 101–76 after breaking away in the midpoint of the first quarter.

“We played with tremendous focus and intensity, really from the start to the finish,” Orlando coach Stan Van Gundy said in the postgame conference.

Tuesday was Atlanta’s lowest scoring game of the series and featured a tenacious Orlando defense and a return of the team’s 3-point shot, which has been stagnant in the series. Orlando shot 11–26 from deep, with Jason Richardson and Ryan Anderson leading with three apiece.

J.J. Redick also made a return to good shooting, scoring 14 points off the bench and giving Orlando a huge boost in the first quarter to rally the team and the crowd.

The scoring initially got off to a slow start until Orlando opened it up midway through the first quarter after Dwight Howard took the bench with two quick fouls. Howard’s removal forced Orlando to speed up their offense and it paid off, led by great transition scoring by Redick.

Redick—who shot a disappointing 0–6 in field goals in Game 4—came off the bench shooting 5–5 in field goals and finished the quarter with 11 of Orlando’s 26 points in just four and a half minutes of playing time. Orlando also applied great defensive pressure to get steals and force turnovers, limiting Atlanta’s first quarter scoring to 13 points.

Reddick began the second quarter with some great 3-point assists to Richardson and Anderson as Orlando continued their onslaught to pull up by as much as 24 points, even without contributions by Howard.

Howard was largely ineffective for the night. The monstrous center didn’t get his first field goal until the last four minutes of the second quarter and finished the half with six points. He would only score two points in the second half, both off free-throws, and shot only 1–4 from the field.

The Magic went into the half up 58–35, and the game was pretty much over at that point. Orlando maintained a 20-point lead or better for the second half that featured balanced scoring with the team's entire roster getting on the scoreboard.

Richardson led Orlando in scoring with 17 points for the night, followed by Redick’s 14 and Anderson’s 11. Orlando also only had five turnovers for the night—a sign that their offense was sharp.

The Magic head to Atlanta on Thursday to try and force Game 7.

“It will be much much much harder on Thursday and we’ll need to play better than we did tonight to get a win there," Van Gundy said after the game.