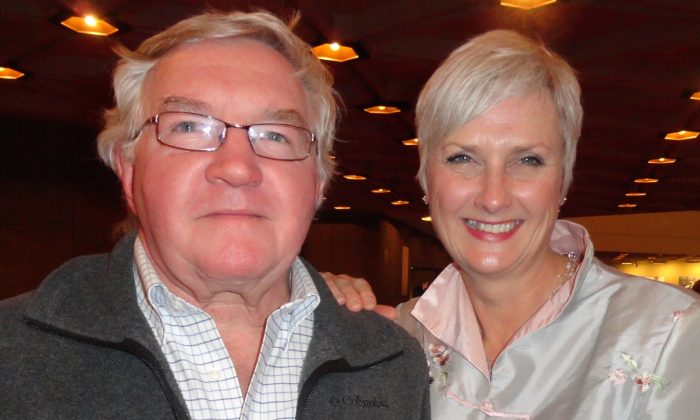 The couple travelled from Almonte, about 50 km west of Ottawa, to attend the classical Chinese dance and music production. Mr. Ayling is the editor-in-chief of “The Forestry Chronicle,” the official journal of the Canadian Institute of Forestry.

“It’s really spectacular, it’s amazing,” said Mr. Ayling. “It’s very interesting that they have two people come out and explain what we’re about to see. I hadn’t realized that’s the way it went, but it’s very good, very nice.”

The two emcees, Catherine Fang and Ben Freed, provided introductions to the 21 pieces in English, French, and Chinese. The emcees also introduced all the instruments in Shen Yun’s unique orchestra, which combines a Western orchestra with traditional Chinese instruments. They also introduced the ancient art form of classical Chinese dance—the basis for Shen Yun’s presentations.

It is Shen Yun’s mission to revive authentic Chinese culture, and classical Chinese dance is one way in which 5,000 years of Chinese culture has been passed down and retained throughout history.

Through classical Chinese dance and digitally animated backdrops, Shen Yun takes the audience through 5,000 years of civilization and across different landscapes in China, Mongolia, and Tibet.

“I liked the fact that some of the dances tell a story, and these are stories that everybody can relate to,” said Mrs. Ayling. “They’re like fables—they’re simple but well acted out.”

Story-based dance is one of the hallmarks of a Shen Yun performance. One piece that caught the attention of the couple was “The Fable of the Magic Brush.” In it, the backdrop adds depth to the action on the stage as characters seemingly move in and out of the screen.

“That was very clever the way they used the backdrop for that,” said Mrs. Ayling.

Shen Yun’s performances also illustrate traditional Chinese values. In the piece “The Power of Compassion,” a police officer hurts his leg while persecuting a group of peaceful meditators. The dance brings to the stage the story of Falun Dafa practitioners who are brutally targeted by the Chinese regime today. The practitioners help their stricken persecutor who then regrets his actions after seeing the kindness and sincerity of the practitioners.

“Again, very simple, but it’s a very strong message, and it’s a good message for everybody,” said Mrs. Ayling.

“The message is we should all have compassion for one another no matter where we come from or what our life has been like before, but we should all care about each other,” explained Mrs. Ayling.

Shen Yun has become part of Ottawa’s cultural calendar at the start of each year. It is performing this year at the NAC for the ninth straight year.