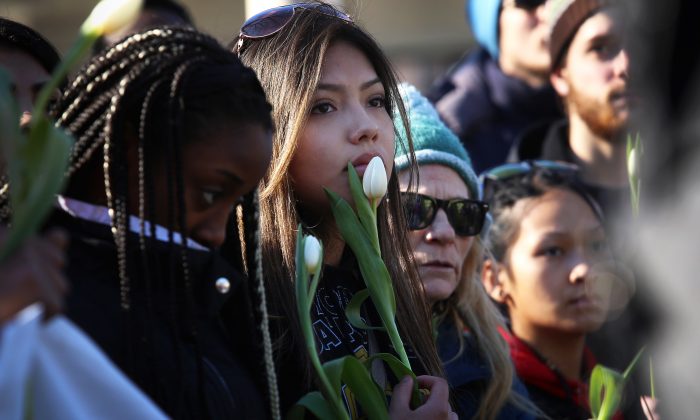 No doubt Madison, Wis., would rather not be compared to Ferguson, Mo., the city known for its police shooting that sparked nationwide protests.

But when a Madison police officer shot and killed an unarmed black teen on Friday, the two cities were linked. Fortunately, so far officials in Wisconsin are handling the tragic incident differently than their peers in Missouri did, after officer Darren Wilson killed Michael Brown.

They have not met protesters with a show of military force. Rather, the chief of police apologized and the name of the officer who shot the young man was made public right away.

Hundreds of people went to the Madison statehouse to peacefully protest the death of Tony Robinson, 19.

It was very unlike in Ferguson, where the assembled protesters were surrounded by police in riot gear and armoured vehicles, according to WISN local television footage.

Madison officials also immediately released both the name of the officer in the shooting and information about the deceased young man. In contrast, tensions were inflamed in Ferguson when authorities withheld the name of the officer for a week. Then when they finally released the officer’s name, it was done along with new surveillance video showing Brown shoving a clerk in a store. Protesters said the juxtaposition was offensive.

Madison police officer Matt Kenny shot Robinson late Friday while investigating a call that the young man was jumping in and out of traffic and had assaulted someone. The officer heard a disturbance and forced his way into an apartment where Robinson had gone. Authorities said Kenny fired after Robinson assaulted him.

Madison Chief of Police Michael C. Koval quickly wrote a blog post expressing sorrow. “I realize that in order for us to achieve greater strides in community-based policing, the cornerstone for making that a reality starts with us earning your trust.”

“Reconciliation cannot begin without my stating “I am sorry,” and I don’t think I can say this enough. I am sorry.”

The shooting is one in a series of incidents involving white police officers killing unarmed black men over the last year, including in Ferguson, where Wilson shot unarmed 18-year-old Brown on Aug. 9. That shooting sparked weeks of unrest and police were criticized for an overly militarized response.

They roughed up and detained journalists. They were accused of firing tear gas into crowds without warning and without giving them a chance to disperse.

The protests in Ferguson were huge and mostly peaceful, but marred by looters starting on Aug. 10, the day after Brown’s death. After a grand jury failed to indict Wilson, widespread arson and looting ensued.

The courts, the prosecutor, and local and state government officials were criticized for appearing not to be impartial.

A scathing Department of Justice report released in March confirmed the the courts and police allowed systemic racially-biased practices. The DOJ did not find that officer Wilson could be charged for violating Brown’s civil rights, and found his testimony credible.