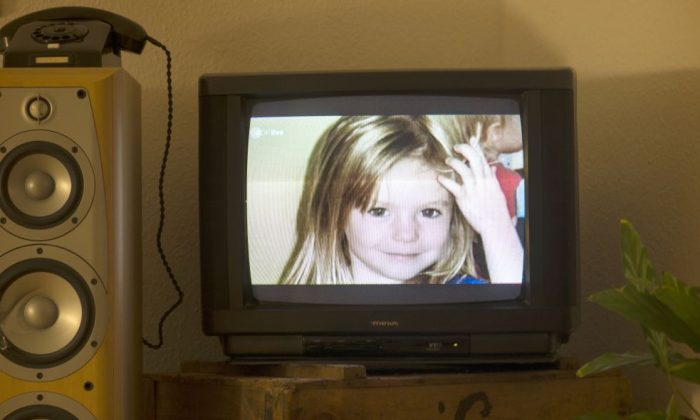 Photo of British girl Madeleine McCann, AKA Maddie is displayed on a TV screen at an apartment in Berlin, Germany, on Oct. 16, 2013 during the broadcast of German ZDF's 'Aktenzeichen XY' program. ( JOHANNES EISELE/AFP/Getty Images)
Europe

Madeleine McCann, who went missing in 2007 from a resort in Portugal, may have been stalked before she was abducted, a book has claimed.

A report from The Express said the book claims that a “prowler [was] seen stalking” the apartments where the girl, who was 3 at the time, disappeared.

The book, by Anthony Summers and Robynn Swan, says that one British mother at the resort in Praia da Luz answered the door and a stranger asked her for donations to an orphanage.

“She soon realised he wasn’t really looking at her, but was staring intently at her young daughter of three or four who was standing at her side, holding on to her skirt,” the book said. “She later saw that man watching her place during the afternoon. The next day she went upstairs to fetch something for a moment and as she started to come downstairs she saw what she thinks was the same man in the room where her child was and as soon as she started to come into the room he scarpered.”

Summers said that the woman, who was not named, believes the man wanted to abduct her child.

According to Fox News, citing the same book, the McCanns’ vacation spot was likely being watched before their daughter went missing.

“Two separate witnesses apparently saw a man, whom both described as very ugly or with a spotty or pimply face, staring fixedly at apartment 5A. They both described him being in the same position in the street,” author Swan said.

And another intruder a few years earlier got into the bed of a young girl in another resort in Carvoeiro. The man, according to the book, chased after the girl before her sister woke up.

“What they noticed about this man was that he was wearing what seemed to be a surgical mask and he had wound laundry around his feet, seemingly to keep from making prints or leaving marks,” Swan said.