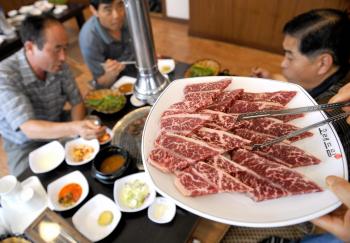 BEEFY: South Koreans taste US beef during a tasting event supported by the Korean Medical Association at a restaurant in Seoul on July 9. The association joined a government-led campaign to dispel public concerns about mad cow disease. (Jung Yeon-Je /AFP/Getty Images)
US

Following a 2003 case of mad cow disease spotted in a U.S. cattle herd, U.S. beef processors and beef cattle ranchers are losing billions of dollars in exports each year, a report from the U.S. International Trade Commission (ITC) concluded.

The report, conducted from 2004 through 2007, points to animal health and food safety measures in other countries, primarily Japan and South Korea,  that are inconsistent with international standards and are making it difficult for U.S. exporters.

Many countries restricted imports of U.S. beef following the 2003 discovery of bovine spongiform encephalopathy, also known as mad cow disease, in a dairy cow of Canadian origin in the U.S. cattle herd.

“The cattle and calf industry continues to be an integral sector of the U.S. economy, accounting for more than 20 percent of the total value of U.S. agricultural production in 2006,” according to the report.

The ITC report found that from 2004 to 2007 animal health and food safety regulations in importing countries reduced U.S. beef exports by $2.5 billion to $3.1 billion per year. Some export sales were offset by increased sales in the U.S. domestic market, but the estimated revenue losses for beef processors exceed $1.4 billion every year.

Estimated revenue losses for U.S. beef cattle producers exceed $1 billion in each year. Losses were greatest in 2004 and have generally declined over time, as some countries have eased restrictions and U.S. exporters have developed alternative markets—but at lower prices.

The ITC is an independent, nonpartisan, fact-finding federal agency that completed its report at the request of the U.S. Senate Committee on Finance.

Besides the figures for computing national finances, the report offers a plea to the Korean and Japanese governments to ease their restrictions.

"Continued Korean government restrictions on U.S. beef imports have become a major impediment to consideration by the U.S. Congress of legislation to approve and implement the U.S.-Korea Free Trade Agreement,” the report’s summary reads.

"While I'm pleased that Korea is accepting some U.S. beef, it is clear that USDA and (the United States Trade Representative) must redouble their efforts to fully open markets in Japan, China and the rest of the world to safe, delicious U.S. beef," said Sen. Baucus, who requested the report from the ITC, according to Reuters.