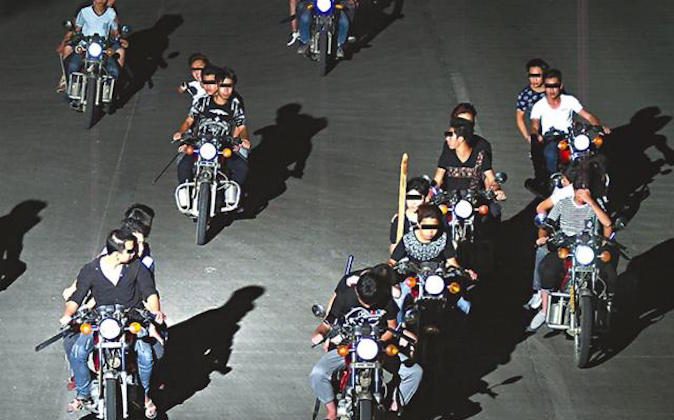 Knife-wielding bikers on the move in an undated photo. (Screen shot/Apple Daily)
China

Residents of a southern Chinese city who fancy a late night walk or drive could find themselves in a hospital emergency room—if machetes-wielding bikers spot them.

On April 30, police in Jieyang City, Guangdong Province announced the arrest of seven suspected members of a motorcycle gang, according to state-run Guangzhou Daily.

Police say the bike gang, which operates in groups of 3 to more than 30, randomly attacked pedestrians on quiet stretches of roads near parks and villages between 11 p.m. and 4 a.m. for nearly a year. They also chased and surrounded motorists before beating up the driver and vandalizing their vehicles.

These bikers—mainly unemployed, fashionably dressed men in their late teens—would ride out to slash pedestrians with long knives and axes when they got bored with chatting among themselves in coffee shops, Hong Kong publication Oriental Net reports.

“I slash others to build up my courage,” said Chen, a biker, to Hong Kong newspaper Apple Daily. “After a lot of practice, I now dare to go out and slash people by myself. You can say it is an improvement,” Chen added.

Knife attacks have increasingly been reported in China in recent years, with a number of high profile incidents in 2014—in March, over 10 knife-wielding men wearing black killed 29 and injured over 140 people at a train terminal in Kunming City; two months later, a slashing incident in Guangzhou City left 6 wounded; at a school in Hubei Province, a man hacked 9 people with a fruit knife, killing 4 of them in September; in November, another man stabbed 8 and killed 7 in an attack at a military hospital.