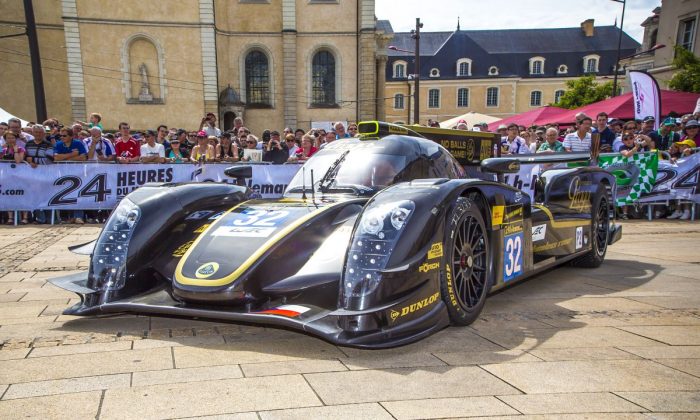 One of the Lotus Praga T128 LMP-2 cars waits at scrutineering for the Le Mans 24 on Sunday, June 16. (lotus-lmp2.com)
Motorsports

A group of workers with a truck and a court order showed up at the Lotus garage and began boxing up suspension parts, steering wheels, and whatever was lying around that was small enough to lift.

The court order claimed that Kodewa was deeply in debt to some supplier, and would not be allowed to race in the 90th Le Mans 24, which starts Saturday, June 22.

Parent company Lotus Praga went to court Wednesday morning, where a magistrate vacated the initial claim, ruling it was unfounded.

All parts have been returned, and at least one car had been reassembled and was turning laps during practice Wednesday afternoon. How much this might set back the team is unknown, but at least both cars should be able to qualify.

A statement on the Lotus Praga website claims the Adess AG and sister company SCE Solutions, which designed and built the cars, owes Kodewa a seven-figure sum, though how the constructor would owe the customer was not made clear.

To add to the confusion, Stéphane Chosse, founder of Adess AG and sister company SCE Solutions, announced a few days ago that Adess had completed a development on a 2014 LMP-1 chassis and was looking for a team to race it.

The legal wranglings between Lotus Praga, Kodewa, Adess, and SCE Solutions might go on for quite a while, but for motorsports fans, the issue is sufficiently settled since the two Lotus T128s will participate in the race.

The 90th running of the Le Mans 24 starts at 3 p.m. local time on Saturday, June 22. In the United States, follow the race on Speed-TV and Speed.com.