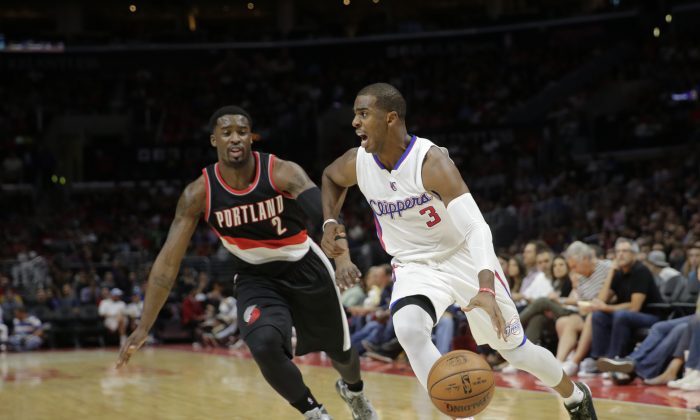 The Los Angeles Clippers are trying to right the ship after struggling in the early part of the season.

Paul Trade Would Have Helped Pelicans

The vetoed Chris Paul trade would have greatly helped the New Orleans Pelicans.

The team just played Kobe Bryant the Los Angeles Lakers, another of the three teams on the deal that was veteod by then-NBA commissioner David Stern.

The trade in December 2011 would have sent Paul to the Lakers, Lakers forward Pau Gasol to the Rockets, and Lakers forward Lamar Odom, Rockets forward Luis Scola, and Rockets guards Kevin Martin and Goran Dragic to the Hornets along with a first-round pick.

“This was one of those rare win-win-win deals for all involved. It would’ve given the Hornets a starting power forward (Scola), a starting shooting guard (Martin), a backup point guard (Dragic) and a player (Odom) who could play both forward positions off the bench. Yes, at the time, Odom was 32, Scola 31, and Martin approaching 29. But they also were tradable assets with solid pedigrees,” wrote Jeff Duncan of The Times-Picayune.

But Stern nixed the trade citing competitive reasons, and the Hornets are now left with very little from the trade that did go through–Eric Gordon and Austin Rivers.

“I believe Stern had the Pelicans’ best intentions at heart. But he clearly botched this one. By acquiescing to small-market owners, he unwittingly torpedoed the rebuilding process of the small-market Pelicans. Officials from the Lakers and Pelicans politely declined to discuss the matter this week and their reticence is understandable. They work for the NBA and have little to gain by criticizing the deal three years after the fact,” Duncan said.

“Fact is, there’s not much to say. The results are apparent on the court. The large-market Clippers benefitted from the trade. And the small-market Pelicans are still trying to recover from it.”

Blake Griffin is facing a misdemeanor battery charge stemming from a scuffle with a man at a Las Vegas Strip nightclub, according to court records obtained this week.

The 25-year-old Griffin is due for arraignment Dec. 8 before a Las Vegas justice of the peace on a charge that could get him up to six months in jail if he is convicted. The criminal complaint was filed Friday, and a summons was issued for his appearance in court.

The Clippers were aware of the complaint, team spokesman Seth Burton said, but had no immediate comment.

It wasn’t immediately clear if Griffin had a Las Vegas lawyer handling the case.

Las Vegas police said last month that they were investigating a man’s claim that Griffin attacked him early Oct. 19.

The complaint lists the victim as Daniel Schuman. An attempt to reach Schuman by telephone wasn’t immediately successful.

The celebrity news website TMZ quoted Schuman saying that Griffin grabbed his neck, took his cellphone and slapped him after he took a photo at Tao nightclub at the Venetian resort.

Griffin and other Clippers players were at the club after playing an exhibition game in Las Vegas against the Denver Nuggets.

Griffin said that he’s not allowed to give details but told reports that “I’m very confident in the situation, so once I can [speak on it], I will.”

“I definitely wouldn’t say scary. I feel more badly just for the fact that it’s a distraction,” Griffin said. “I really don’t know how big of a distraction it really is, but it is. So that’s what I feel mostly bad about.”

The Clippers are having obvious troubles at the small forward position and may bring in Metta World Peace to try to help solve them.

He signed with the Sichuan Blue Whales of China in August but can join an NBA team in February an opportunity opens up.

“This isn’t the first time the Clippers have expressed interest in the 19-year veteran. Last season when Metta and the New York Knicks parted ways, the Clips took a hard look at adding him at that time. New York wasn’t a good situation for World Peace, as he was reportedly frustrated with the lack of playing time, going from 33.7 minutes per game in his final season for the Los Angeles Lakers, to appearing in only 29 games for the Knicks while averaging a career-low 13.4 minutes a game,” noted Hoops Habit.

“Adding World Peace to the Clippers means also adding his championship pedigree gained during his days playing with the Lakers. Depending on what he can give at his age, he’d give contribution to the Clippers in another two areas where they’re lacking at the moment, defense and rebounding.”

Metta himself nor the Clippers have commented on the rumor.

PORTLAND, Ore.—Former Microsoft CEO Steve Ballmer and his wife Connie have donated $50 million to the University of Oregon that will be used for scholarships, obesity research and marketing.

It was the university’s first major contribution since declaring last month that it planned to raise $2 billion over the next four years.

With Nike co-founder Phil Knight as a graduate, the university is accustomed to announcing large donations. Ballmer also made his fortune with a company based in the Pacific Northwest.

Interim school president Scott Coltrane said in a statement that the university receives only about 5 percent of its budget from the state, a fact that makes large donations a key part of school finances.

“This gift will fundamentally change lives, creating a better future for countless Oregonians by providing access to educational opportunities at the UO,” he said of Ballmer’s donation.

Connie Ballmer graduated from Oregon in 1984 with a degree in journalism. She was appointed to the university board of trustees when it was formed last year.

The university said the $50 million would be split three ways:

— $25 million toward an endowment fund for the PathwayOregon scholarship program that helps low-income Oregonians afford a higher education. The university estimates 400 to 500 students will benefit from the gift annually.

— $20 million to hire top faculty for the prevention science research program, with a focus on obesity.

— $5 million to help market the university’s academic strengths, which are overshadowed by the highly ranked football team.

Coltrane told The Eugene Register-Guard that the donation came with no strings attached.

“They are very concerned that we are very creative and steward the money well, but they’re not telling us how to do that,” he said.

Ballmer joined Microsoft in 1980 and led the company from 2000 to 2014. He bought the Clippers earlier this year.

Ballmer earned his degree from Harvard College. On Thursday, he announced a large gift to help the college expand its computer science faculty.